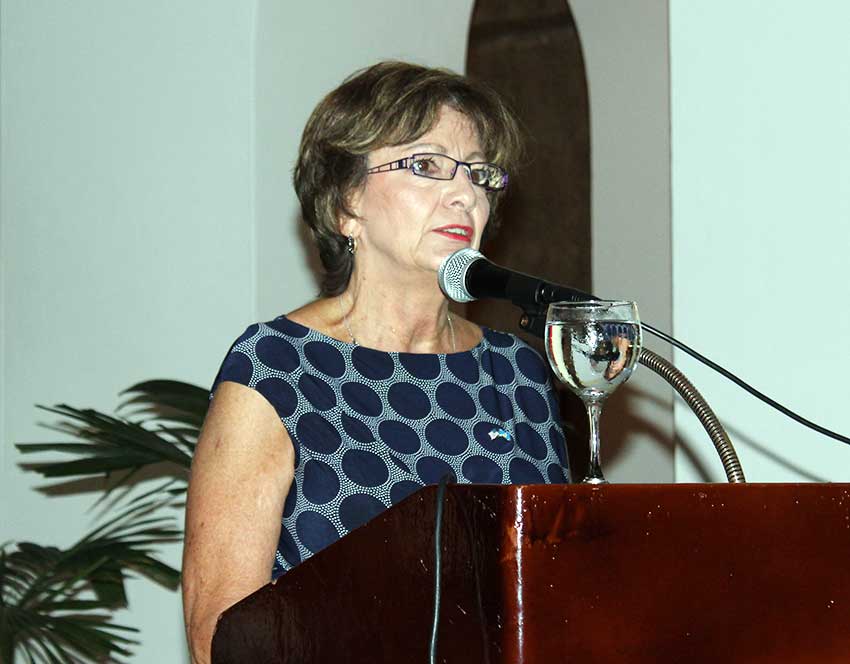 THE United States Ambassador to Barbados and the OECS, Linda Taglialatela, has given her government’s assurance to continue deepening ties between the United States and Saint Lucia.

Speaking at a reception held at Royal by Rex Resorts in Rodney Bay last Friday in anticipation of today’s 241st anniversary of the United States Independence, Taglialatela said several bilateral arrangements between the two countries will redound to bettering the friendship shared over the years.

This year, Route 66, one of America’s iconic highways, which runs from Chicago to Los Angeles, is being used as a symbol of Americana to symbolize freedom, adventure and opportunity. Taglialatela referenced the famed highway as a metaphor of the bonds between the two nations.

“The relationship between the United States and Saint Lucia is as strong as ever,” Taglialatela said. “Much like Route 66 unified the diverse cultures and geography of the United States, the alliances between our nations unify us. Those ties between our countries continue to bring the vital parts together to ensure our shared prosperity and security.”

Tagliatela said her government recently released a new multi-year Caribbean engagement strategy that establishes a framework to enhance prosperity and security in the region and bolster U.S. relations with the Caribbean, the Diaspora, civil society and private sector. The strategy aims at supporting the U.S.’s efforts to advance Caribbean partnership in areas such as prosperity, security, diplomacy, education, health and energy.

“As the third border of the United States, the Caribbean is a vital part of our efforts to advance democratic principles, enhance regional security cooperation and increase trade and investment in the Western Hemisphere,” she said.

Following sanctions placed on Saint Lucia by the United States after nearly a dozen people were alleged to have been killed by police extra-judicially, the relationship between the two countries seemed in jeopardy as the United States invoked the Leahy Law, substantively barring local police officers from participating in training exercises organized or funded by the United States.

However, relations seemed to have gotten warmer of late, with Saint Lucia receiving the nod from the Ambassador that Washington was still willing to work with Castries to enhance certain systems here.

“We are committed to supporting Prime Minister Chastanet and his country’s efforts to strengthen the rule of law here in Saint Lucia,” Taglialatela said. “Our commitment is demonstrated by the assistance of our rule of law advisor, who provides assistance in updating and revising legislation. These legislative changes will increase Saint Lucia’s capacity to address modern-day challenges such as cyber intrusions and trans-national trafficking.

Taglialatela said the Boys’ Training Centre steelband orchestra is also benefitting from assistance under Phase 1 of USAID’s Juvenile Justice Reform Programme, in the form of upgrading the programming, equipment and facility at the Centre.

She said reducing youth crime and violence continues to be a vital factor for the bilateral relations. Under the USAID’s YES (Youth Empowerment Services) project, the United States will assist Saint Lucia in developing policies and programmes to reduce the risk factors influencing youth crime, violence and victimization.

In September, USAID will also partner with the Minister for Education to improve literacy levels in the local primary school system.

Disaster resilience and sustainable cheaper energy are also areas both countries will collaborate on to make Saint Lucia energy-efficient, Taglialatela said. She added that the USAID’s New Caribbean Clean Energy Programme in the Eastern Caribbean will work to help establish effective policy and regulatory environment in Saint Lucia as well as incentives for greater energy efficiency and low emission growth in the energy sector.

“We have travelled so far together. The road ahead of us may be uncertain. But no matter what the challenges are, I and my country look forward to taking them on with you,” Taglialatela assured.

Prime Minister Allen Chastanet, who also spoke at the ceremony, said the United States, clearly, had been “a huge influence” in the Caribbean but “it’s been a love/hate relationship always with the United States.”

“It’s always one that provokes incredible emotion. But the fact is the United States has represented for us many of the values that we have come to hold extremely high in our society: the rule of law, democracy (and) human rights but, more importantly, the freedom of capital and the freedom of choice. We’ve seen the incredible successes that the U.S. has had in holding those values very dear,” Chastanet said.

Chastanet said that given the challenging times facing today’s world, most countries are looking insularly because of the many conflicts that exist. He said some new rising powers in the world were also making the times interesting.

Despite those concerns, Chastanet said the Western Hemisphere “has benefitted from a tremendous amount of stability, one in which, I think, the values of democracy reign supreme” and thanked the United States for maintaining that stability.

In acknowledging Cuban Ambassador to Saint Lucia, Jorge Soberon’s presence in the room, Chastanet said: “It’s so nice to see that in our hemisphere that the U.S. and Cuba are now on talking terms. I’m hoping that in the future for even stronger relationships which would be to the mutual benefit of both sides. So that is something I think that our country and citizens would welcome because Cuba has been a tremendous friend – not only to Saint Lucia but to the rest of the Caribbean. So I want to congratulate both of you on that initiative.”

Chastanet also spoke about the ongoing unrest Venezuela, indicating that “CARICOM strongly believe that all countries are required to resolve their problems themselves.” However, he contended that the situation was one that has an impact on the region.

“We are extremely concerned with the security in our region,” Chastanet said. “Therefore, we look forward to working with all of our brothers and sisters of the Caribbean to see how we can resolve this unfortunate situation that’s taking place in Venezuela,” Chastanet said.

Chastanet thanked Taglialatela for the U.S.’s to our DPP’s Office, the decades-old presence of the Peace Corps in Saint Lucia and the work USAID and other agencies have undertaken in Saint Lucia. Like Taglialatela, he, too, looks forward to seeing U.S./Saint Lucia relations become warmer.

“I’m looking forward to seeing our relationship grow from strength to strength…So please convey to your Government our best wishes on this great day and thank you for the incredible support leadership role you’ve been playing in this region and we look forward to many more good days together,” Chastanet said.