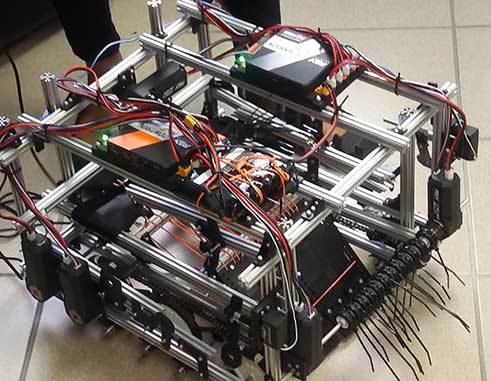 A group of St. Lucian teenagers have put St. Lucia on the technological map as they get set to compete with the rest of the world in a robotics challenge this month.

The three 17-year-old Science and Technology students from Sir Arthur Lewis Community College, who will be going by the name “Team 758”, will be taking part in the first-ever Global Robotics Challenge, from July 16-19 in Washington DC, where they will go head-to-head with students from over 150 nations.

Reshul Narhari, Sergaun Roserie and Keegan Patrick have built a robot, which will be part of the challenge, called H2O Flow, a theme based on filtering water and gaining access to clean water in nations across the Middle East, Africa and some South American countries.

Spokesperson for the team, Narhari, said the robot is responsible for filtering water particles. However, it uses orange and blue balls in the place of actual water, where the balls will be filtered by the robot based on the colours.

She said there is a two-and-a-half minute time limit in which they will be competing against other teams and whoever filters the most balls and has the most cumulative points wins the challenge.

Narhari said it was a difficult task at first and that they had a lot to learn through trial and error. In the end, perseverance paid off.

She said she is especially happy to know that Science and Technology of this level will be introduced to the school curriculum.

She said: “This is what we have always dreamt of. Even in secondary school, we would always think of ‘What if we could have what other schools in other countries had?’ Now that they’re introducing it in St. Lucia, we are very proud of St. Lucia for doing this.”

Narhari went on to say: “We can actually see our nation growing into digital technology, and it’s really exciting for us, and we’d love to help out in any way possible.”

She said they would gladly visit schools to give talks and demonstrations in hopes of teaching some of what they know to the younger generation of tech scientists.

Jermaine Anthony, Curriculum Specialist for Technology Integration in the Department of Education and Innovation, said: “This in itself highlights some of the things we were trying to do as a department to introduce technology in the curriculum, and to introduce some more hardcore technological skills in the curriculum, particularly computer coding and robotics and the likes.”

She said: “What this team demonstrates is that we in this country are blessed with tremendous talent, and if that talent is honed, encouraged and facilitated, then extraordinary things can happen.”

St. Lucia is one of the smallest nations to take part in the event. Yet, according to Dr. Rigobert, this proves that size is not an impediment and that focus should be placed on the innate and divine abilities of our young people.

The Minister said: “Small as we are as a nation, we cannot afford to remain passive about the power of digital technology, and that is why over the past 13 months, we have exerted tremendous energy to ensure that there is complete infusion of technology in the education sector.”

She said she understands that this will not happen overnight and recognises that it is a must to train the next generation to become fully functional citizens in the growing technological world.

Dr. Rigobert went on to say: “As of September this year, we will be introducing the digital literacy curriculum for lower secondary schools. This curriculum is designed to ensure that students achieve a comfortable level of digital competency/literacy by at least Form Three.”

Curriculum Officer of Natural Sciences, Giennetti George, said: “This is a great platform for us to highlight our young people and the work they are doing. It is wonderful to find out that coding and robotics will become part of the curriculum because clearly STEM is the way to go.”

She continued: “STEM can provide a platform for employment, so we need to embrace science and technology a little more. Also, we are hoping that next year, robotics can be featured at our science fair. So we are very excited about this whole initiative, and what is happening as far as science and technology and coding and programming goes.”

She urged everyone to follow the progress of the team on the Facebook page Team 758, where they are hopeful that the event will be streamed live.

Following the speeches and introductions, the team treated their parents and members of the media to a quick demonstration of how their robot works, wowing the small crowd with their innovation and creativity.