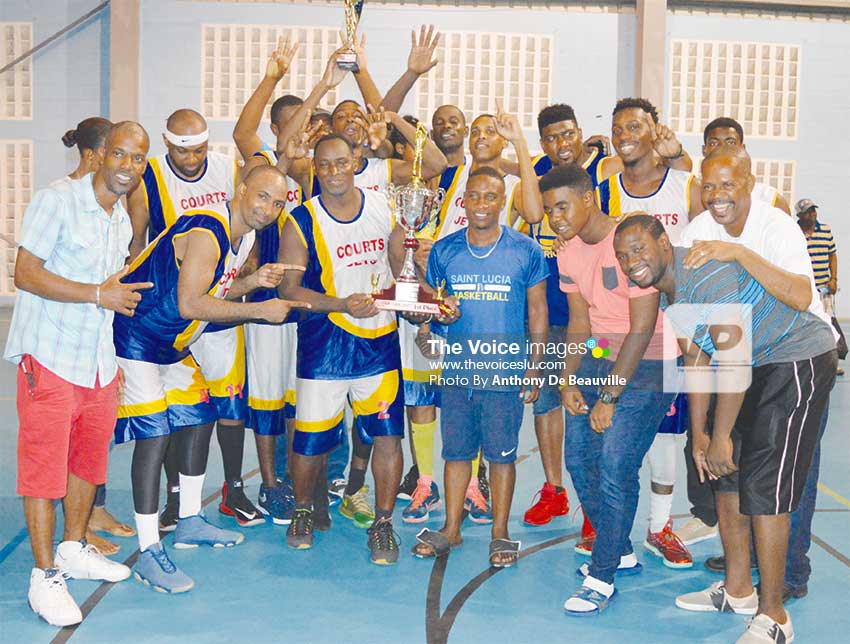 THE writing was on the wall at the half-time whistle with the 52-37 score favouring defending champions Courts Jets as the KFC National Basketball League ended on Saturday evening at the Beausejour Indoor Practice Facility.

VBCC Warlords showed some urgency in both offensive and defensive in the first half, but the tactical and experienced Courts Jets Head Coach, Francis Raphael, proved too much for VBCC Warlords as he made several changes in quick succession, with the third quarter ending 66-55, an 11-point lead for Courts Jets.

Going into the final quarter, there was no letting the foot off the gas pedal for Courts Jets with Ali Quinlan, Jerry Charles, Joel Polius, Troy and Andre Louison Keegan Polius as they took the game and championship to their rivals scoring 21-9 in that quarter.

For Courts Jets, the Most Valuable Player Andre Louison scored 25 points, 11 rebounds and 4 steals; Joel Polius had 15 points and 11 rebounds. Keegan Preville was awarded co-MVP for his outstanding performance in both offensive and defensive for his team from the quarterfinals round through to the grand finale.

VBCC Warlords’ Marcian Calderon led the way for VBCC Warlords with 23 points and 14 rebounds; he was awarded the MVP for the regular season, while Nigel Butcher also scored 12 points and 10 rebounds.

He said: “This year was another successful year not without its challenges, especially on the financial side. You have increasing demands in sporting events, entertainment events and recreational events all competiting for the same pool of sponsorship. So it becomes more difficult for us to attract the financing and sponsorship that is required to run our events.”

He added: “The SLBF decided to go with one league this time around where the two leagues are vying for one single championship. It worked out pretty well and the level of competition actually improved this year. We found that the more experienced and better players stood out, but the lesser teams showed slate on court likewise.”

For the remainder of 2017, the SLBF will go into its developmental activities which also include national team development. There will be an open tryout, but invitation will be extended to the pool of players who showed certain talent throughout the season the goal being for Saint Lucia to participate in the Caribbean Basketball Championships scheduled for the Dominican Republic in 2018.