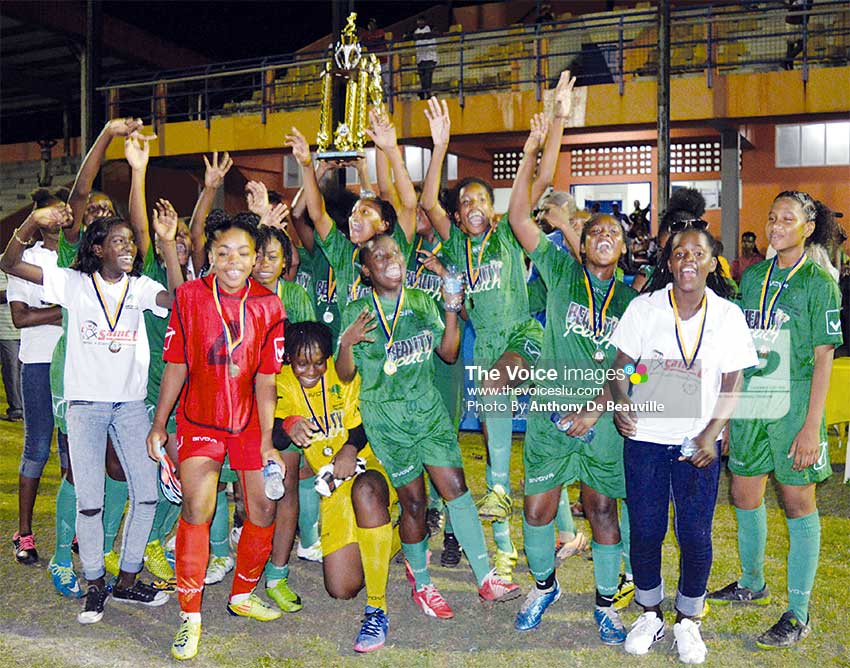 IT was not the usual packed crowd the organizers expected, but the loud shouts coming from the nearly 350 football fans who attended the third place playoff and finals of the Saint Lucia Football Association’s Women Under-16 Championship on Saturday at the Phillip Marcellin Ground in Vieux Fort did not regret the outing.

In the third place playoff, it was easy sailing for Gros Islet as they defeated Marchand 3-1 with goals from Vionce Weekes in the 30th and 72nd minutes and Kenisha Joseph in the 59th minute.

Kurshima Ramsay pulled one back for Marchand in the 81st minute but luck stayed with the girls from the north.

In the grand final, with a combined 14 national players in action on the pitch and a whopping 61 goals between them in six matches, defending champions Vieux Fort South defeated a formidable Soufriere team 2-0 to lift their second consecutive title in that age group.

The versatile Ilana Lashley, with two minutes left before the halftime whistle, ensured VFS got into the break with an advantage when she shot home goal number one in the 43rd minute to the delight of her teammates and home support.

On the resumption, Soufriere came out firing as they needed two goals to win. But VFS was also equal to the task as they continued to mount relentless pressure on their opponents. Their perseverance paid off as Lashley sealed the deal in the 65th minute with a well-struck right foot shot which shattered the back of the Soufriere nets to start a celebration.

He said, “I am very happy for the girls in retaining the championship trophy they won last year. We played unbeaten. I am pleased with the performance throughout. Soufriere came at us knowing full well the first time we played each other in the preliminary stage of the tournament the game ended 0-0.”

He continued: “Soufriere played a good game but we defended well and could have scored at least two more goals but made some bad choices in front of goal. This is an area we need to work on pretty soon going forward as defending champions.”

Lashley was voted the MVP of the final for her two goals.