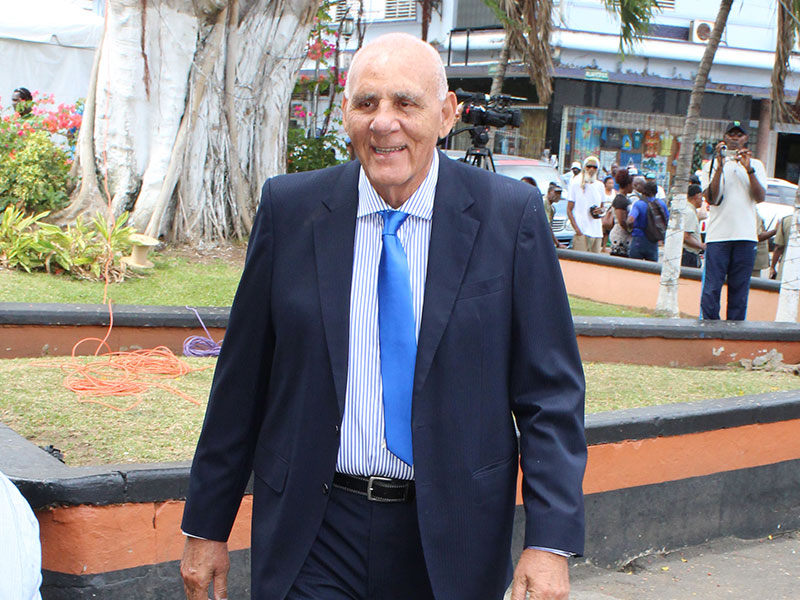 The father of the island’s Prime Minister has issued a blatant threat to an American Catholic priest who recently took part in demonstrations against the government for its ongoing deal with a foreign investor, namely the controversial Desert Star Holding Limited Project (DSH).

In a 90-second excerpt from the talk show “Open Mike”, which aired on Sunday on DBS Television, Michael Chastanet is seen and heard speaking directly to Father Kevin Murray for the latter’s role in the demonstrations.

The video starts with Chastanet thanking Father Murray for his time spent in St. Lucia, then Chastanet goes straight into suggesting that Murray leaves Vieux Fort, where the ethnicity is predominantly black, and go back to his country of origin to take up their fight against racism, saying: “You should go back to America and take care of your own country where the slogan is ‘Black Lives Matter’”.

Following this statement, Michael Chastanet goes on to refer to the “David England Act” which was action taken by the island’s first Prime Minister Sir John Compton.

Under the immigration act which allows non-nationals to be granted visas to remain on the island and to have those visas revoked, Sir John Compton instituted what was known as the “David England Law”, which he used to expel broker David England and his wife, Jane, from St. Lucia in 1983, making them persona non grata.

However, that law was repealed by the St. Lucia Labour Party Government in October 1997 – five months after it took office — and the Englands were reinstated as “persons of good order”, even though they never returned to the island.

The senior Chastanet reminded Father Murray that he was a foreign national representing the church, and that he should stick to doing just that, warning that, “Those demonstrations you are participating in will do you no good!”

The clip was played during a daytime radio talk show on Tuesday afternoon, but shortly after it was played, the Senior Communications Officer in the Communications Unit of the Office of the Prime Minister, Nicole Mc Donald, called the talk show to say that the comments made by Chastanet Sr. were not shared by the Office of the Prime Minister, and that the said sentiments shared were in fact the contrary to the OPM’s views and mandate.

Mc Donald said: “Since taking office, we have continuously engaged in openness and dialogue with stakeholders and interest groups on issues of common concern. We welcome continued discussion from the public on all matters of development.”

Father Kevin Murray has on a number of occasions participated in and also defended his participation in demonstrations against the DSH Project, stating that he was taking an active step to stand with the people of Vieux Fort who despite being concerned about the project, say their voices are not being heard.