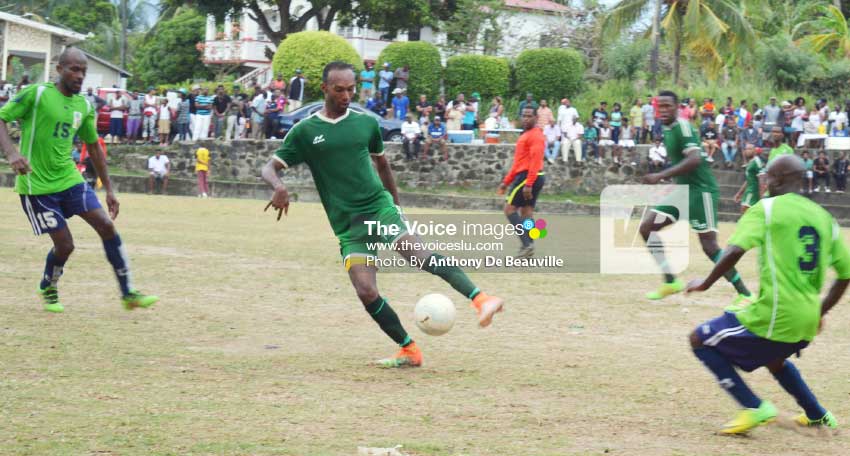 THE eight teams heading into the quarterfinal round of the Super League have been decided following the final two preliminary matches played last weekend in Desruisseaux where Central Castries and Desruisseaux claimed the final two remaining spots.

On Saturday, in a must-win situation, Central Castries took on Babonneau. Babonneau took the business approach and got up and running from the outset. It paid off for them as Tristan Pierre found the back of the Central Castries net in the 4th minute. Babonneau created the most of the opportunities in the first half; however, they were not able to convert another at the halftime whistle.

Both teams came out firing in the second half as they needed crucial goals and points.

Central Castries Head Coach, Sean Kurton halftime team-talk seemed to inspire his players, because 5 minutes into the second half, the team equalized with a goal from Shaquille Joseph.

Six minutes later, Central Castries got a lucky break from their attack, with their diminutive midfielder, Zachary Leriche, giving his team the lead in the 56th minute with his 3rd goal of the tournament.

At that stage, it was all to play for as both teams knew that an outright win for either would secure their ticket into the quarterfinals. In the end, it was Central Castries who showed the grit in the 75th minute as Shaquille Joseph hit the winning goal to make it 3-2.

With 15 minutes left on the clock, Babonneau battled valiantly but they were unable to find an equalizer.

Meanwhile on Sunday, in the encounter between Choiseul and home team Desruisseaux, Choiseul after arriving late, started the match with only 8 players on the pitch. Desruisseaux took the game to them, seeking to press home their numerical advantage.

They did got that advantage in the 16th minute when Gerlanne Neptune got the home team up and running and gave the home support the expectation that a rout was in store. Choiseul fielded another two players and eventually fielded a full eleven by the 26th minute. By that time, they were down 1-0. Despite that margin, Choiseul seemed the more composed of the two teams in the earlier exchanges as they created a few more chances which kept Desruisseaux at bay.

The first half ended 1-0 in favour of Desruisseaux.

The second half lived up to expectations, but maybe not what most of the home team supporters expected as Choiseul came out all guns blazing, creating waves and waves of attack.

Choiseul eventually got their reward in the 49th minute as Kurt Rosemond found the back of the net to get his team on level terms. At 1-1, it was game on.

More chances were created on both sides but Choiseul seemed to be the better team in the second half.

However, Desruisseaux took the lead in the 70th minute when Kurt Charles gave the home support what they were looking for.

Choiseul kept at it and were rewarded 3 minutes later as Miguel Cox hit a wonderful header to silence the home support which sent their small contingency into raptures.

Choiseul, the team which had not registered even a point so far, were tied with the former group leader at 2-2 late in the half.

Choiseul created even more chances; leaving Desruisseauxwithout another shot on goal. With the scores tied and with 28 minutes to go, fans were excited about the possibilities.

There were a few great plays and chances created afterwards, mostly by the Choiseul team, but no goals were scored. Choiseul’s Lee Avril received a red card in the 82nd minute, handing Desruisseaux a numerical advantage, just like they had in the first half.