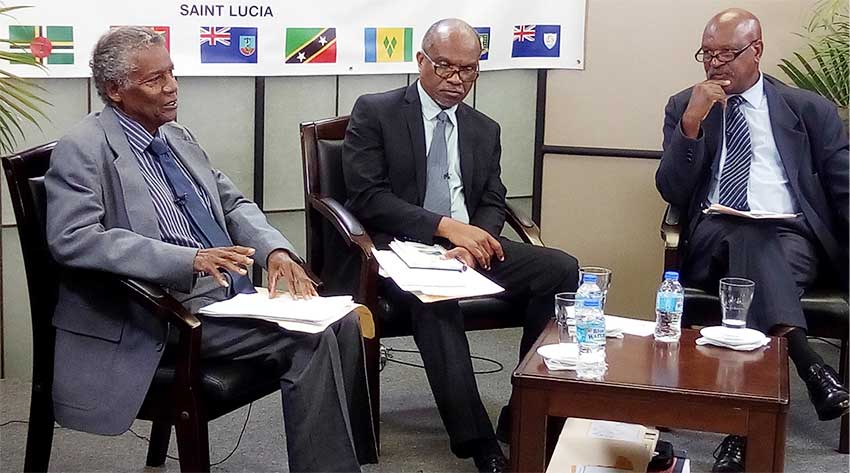 THE Supreme Court of the Organization of Eastern Caribbean States (OECS) yesterday launched a mediation campaign to allow Saint Lucians another way of resolving disputes other than the court system.

High Court Judge Francis Belle, Administrator and Regional Mediation Coordinator Francis Compton and Justice of the Peace and Psychologist Dr. Urban Seraphin all attempted to explain the logic, soundness and advantages of this new mode of quelling disputes at a press conference held in the studios of the Government Information Service (GIS).

Mediation is a structured dispute resolution process where an impartial third party the mediator, meets with disputants in an effort to identify the issues, explore options and clarify goals, outside of a court environment.

According to the trio, mediators, unlike judges, do not decide cases or impose settlements; the mediator’s role is to help the parties involved in a dispute to communicate and negotiate with each other in a constructive manner to gain a better understanding of the interests of all parties and to find a resolution based on common understanding and mutual agreement in strict confidence.

One of the things looked at in mediation is joint gains for the parties, especially in family situations where children are involved.

“However you look at it, mediation not just benefits the court, but the community. I think it is important that this message is sent out,” Justice Belle said, adding mediation could work in almost all disputes in the community.

The mediation campaign is part of activities commemorating the Supreme Court’s 50th anniversary. The programme was started in Saint Lucia as a pilot to see whether it would work and to what extent it would benefit members of the public. Its success was evident, therefore, as a result the very same programme was taught in other OECS States.

“It is very easy for a mediator in St. Vincent and the Grenadines to go in one day to the British Virgin Islands and conduct a mediation (process) there without knowing anything and return to St. Vincent with ease — all because the OECS Member States have the very same programme,” Compton said.

Only the parties to the dispute are allowed in mediation and there are no witnesses. It is voluntary and the parties can choose their own mediator. This means that disputants cannot be forced into an agreement. Mediation is also confidential, in that parties must agree that whatever is discussed must remain in the strictest confidence.

Further, mediation is neutral, meaning that the role of the mediator is not to bring about judgement. The mediator’s only interest is that disputants arrive at an acceptable, workable settlement leading to reconciliation.

Also of interest is that the process and outcome belongs to the disputants but if at the end an acceptable agreement cannot be reached, the parties are free to proceed to court.

Justice Belle, Compton and Seraphin all agreed that it is better to mediate than litigate as the latter is costlier — a mediation session costs $400 for three to four hours but could go on longer if a resolution is in sight – and the amount is paid by each party.

The three agreed that almost all disputes can be mediated. They said that a case can be referred to mediation at any stage of the proceedings, in that a Master or Judge may make an order referring any civil action filed in the court to mediation. Further, the parties may by consent notify the court that they wish to have their case referred to mediation and in such a case, the Master or Judge shall make a referral order. The mediation, however, will be conducted by a trained mediator, approved to be on the roster of mediators of the Supreme Court. Parties may select a mediator from the roster of mediators. But if the parties cannot agree on a mediator, one will be appointed for them by a Judge or Master.

When mediation is decided upon, all parties must attend the session. If a party is represented by an attorney, the attorney may also attend by helping the client work out the terms of the settlement; however, an attorney may not attend in place of a party.

Mediation helps to resolve issues before they escalate; provides an opportunity for relationships to be restored, maintained or rebuilt; give parties an opportunity to be heard and discuss their disputes in good faith with intent to settle; is a system in which the parties to the dispute have full say over the outcome of their dispute and is a programme which is faster, therefore, as a result, parties save both money and time.