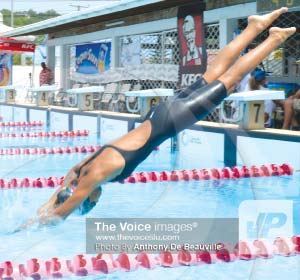 ANOTHER development which demonstrates the crisis in southern swimming is that the embryonic new club, Orcas Aquatics, is clearly still-born and will not see the proverbial “light of day”.

Even the highly successful Schools Swim Programme, where public schools in the south, in collaboration with the District Offices of the Ministry of Education and a team of swim coaches and learn to swim instructors, including Andy Edward and Sherma Bernard, teaching school children to swim is in danger of disappearing, according to information reaching this writer.

The Schools Swim Programme, which once engaged approximately 600 primary and secondary school students, owed a large part of its success to the outreach programme of coaches who then visited every school in the Ministry of Education’s Districts 6 and 7 along with many in Districts 5 and 8.

At the heart of this crisis is a difference in approach as to the purpose and philosophy as regards swim programmes and clubs. Should programmes be centred on swimmers and driven by coaches? Or run by parents and swim administrators?

While Andy Edward, along with Shema Bernard, Ian Francis and some volunteer coaches ran the SFF swim programme, the SFF emerged as arguably the second best swim club on the island despite the lack of pool time available to the SFF and even the absence of a competitive pool in the south.

Among the achievements of the southern swim programmes led by the then SFF Head Coach Andy Edward ably supported by his assistant coaches Bernard and Francis and some dedicated volunteer coaches, was the stunning victory of the Plain View Combined School winning the Primary Schools Swim Meet in 2009, becoming the first and only public primary school to date to win that meet.

Also in 2009, the SFF placed second at the Summer Splash Swim Meet in August, placing ahead of all other local clubs at that year’s edition of that meet. In 2010, the SFF placed at the top of the heap at the same meet in the process defeating not only local clubs, but teams from Trinidad and Antigua.

Other significant achievements of swimming in the south between 2007 and 2012 included the Vieux Fort Comprehensive Secondary School scoring back-to-back victories at the Secondary Schools Swim Meet in 2011 and 2012. The selection of Christian Andrew as the first SFF swimmer on a Saint Lucian CARIFTA swim team resulted in podium positions at the ASATT Championships in Trinidad and the Les Squales Swim Meet in Guadeloupe.

A feature of these achievements against all odds was the tireless work and unity of the southern swim coaches, and programmes with the support of parents, and other supporters of southern swimming, including pioneering work in the SFF getting a corporate sponsor. During that period, it was known that Coach Andy Edward would be up until 3:00 in the morning drafting workouts and seasonal swim plans.

An example of the tireless work of the southern coaches was the adaptation of the Total Immersion swim programme by the SFF and the Schools Swim Programme to transition in short time non-swimmers into competitive swimmers. Even more astonishing was the entry of twelve southern schools in the 2009 edition of the Primary Schools Swim Meet.

Many obstacles were overcome, such as the negative impact of Hurricane Tomas in 2010, which forced the cancellation of practice sessions in November and December. However, the greatest obstacle was not the natural disasters which impacted on all the southern swim programmes nor the lack of pool facilities available to swimmers, but the growing disagreement in practical terms of how swimming had to develop in the south and the role of the various components of the southern swim programmes, the parents, swimmers, swim coaches and learn to swim instructors and sponsors. These differences became particularly marked after 2012 when a gradual decline in southern swimming was first observed.

One former swim parent and club administrator once openly opposed the leading role of coaches in the SFF programme stating, “We pay the coach, so we should call the shots!” Generally, the parents who have held this view have not been able or willing to put in the hours and work required to develop the requisite technical competence required to develop an excellent swim programme.