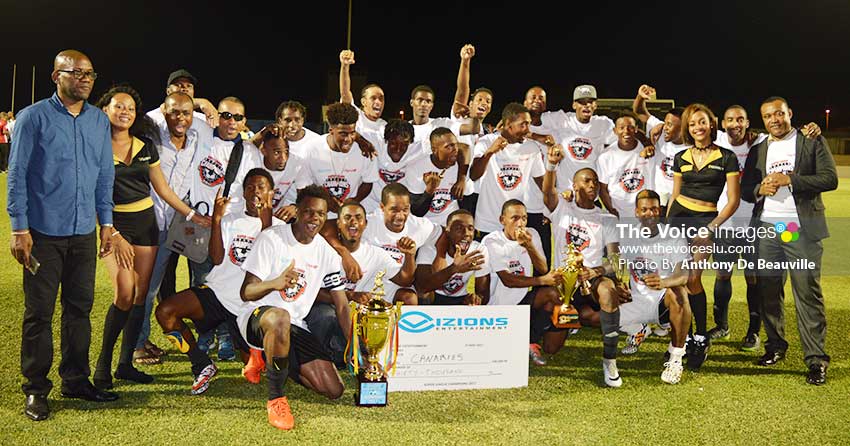 AN estimated 4000 football fans turned up at Daren Sammy Cricket Ground on Saturday evening to witness Canaries defeat the National Under-21 football team and become this year’s ‘Super League’ champs.

The tournament, one of Saint Lucia’s leading football championships, was organized by Vizions Entertainment in collaboration with the Saint Lucia Football Association (SLFA).

Both teams had played each other previously in the group stages, ending in a 1-1 draw at the Soufriere Mini Stadium. Up to Saturday evening’s final, Canaries was the only team that scored against the National Youth Team in the entire tournament.

This time around, both teams started out with confidence amidst the loud noise and whistles emanating from the stands.

In the 17th minute, the National Under-21 team earned a free kick which they failed to convert as the Canaries goalkeeper Quami Jones made a scintillating save.

In the 19th minute, Canaries’ David Henry waltzed his way through the National Under-21’s defense with a clear sight on goal, only to force a great eye-catching one-handed save from the National Under–21’s goalkeeper Vino Barcelette to keep the score locked at 0-0, which remained until the end of the half.

On the resumption, it was all to play for, including the $30,000 cash prize. In the 78th minute for the second time in two matches — and what appears to be an uncertain and unfortunate call — Canaries were awarded a penalty for a handle ball by a player from the National Under-21 team.

The referee took quite some time before finally deciding to book the National Under-21 player and award a penalty to Canaries after consulting with his third official some 60 yards from where the infringement took place.

Canaries’ Bradley Tisson stepped up to the spot and confidently dispatched the penalty kick, eluding the National Youth Team’s custodian, Vino Barcelette, to his left side, and sending the Canaries supporters into a carnival-type celebration. This was Tisson’s second successful penalty kicks in as many matches.

Despite being 1-0 down, the National Under-21s still had the energy and courage as they went on to create at least three more scoring opportunities. But Canaries’ defense was equal to the task and in the process they held on to their 1-0 advantage to hoist their first Super League title.

In the first game for the third place silverware, Vieux Fort South trounced Central Castries 5-1. VFS meant business from the start as they looked to make amends after failing to qualify for the finals one week earlier at the same venue.

Antonio Joseph put VFS ahead in the 16th minute with a brilliant header and went on to tie with Mabouya Valley’s leading goal scorer Vernon Abbott’s (7 goals in the tournament).

In the 24th minute, Vieux Fort South scored another goal, this time through Liam Savery to go 2- 0 up, much to the delight of the VFS supporters.

Despite two goals down, Central Castries never allowed their shoulders to drop and created opportunities of their own. They had the opportunity to cut the deficit by one, but Vieux Fort South’s goalkeeper Leon Alexander made a marvelous save to keep his team up 2-0 and end the first half in favour of the southern team.

On the resumption of play, VFSs Antonio Joseph scored his second goal on the night in the 54th minute to zip past Vernon Abbott and become the tournament’s leading goal scorer with 8 goals. Joseph went on to complete his hat trick in the 73rd minute, and his overall tally to 9 goals, with another brilliant strike, and Vieux Fort South to a 4-0 with 17 minutes left in play.

Travis Valcin pulled one back for Central Castries in the 80th minute, but VFS quickly continued their advantage when Kurt Joseph’s 82nd minute goal made it 5–1 to give the team the third place trophy and bronze medals.

Meanwhile, the huge crowd stayed on for the main draw, where one lucky winner, Tarrius St. Brice of Laborie, drove home with a Suzuki Swift.