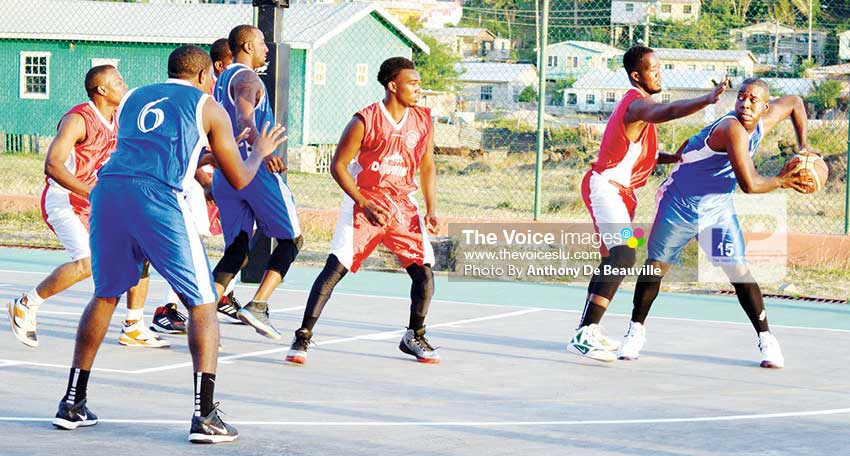 THE National Basketball League organized by the Saint Lucia Basketball Federation in collaboration with KFC takes a break this weekend for the Jazz festival. The championship will resume on Monday at the Vigie Multipurpose Sports Complex with one game on the card.

From 7:00 p.m. that day, Courts Jets 1 take on Bonne Terre. The Jets will be looking to redeem themselves following their 83-28 thrashing by BFTF last Monday while newcomers Bonne Terre will want to continue their winning ways after bagging their first game 62-49 against Combined Schools.

On Wednesday, VBCC Warlords will come up against Police at 7.00 p.m. at the VMPSC. The Warlords will be going all out to make it 2-0 while Police, following their loss to Dennery Dolphins in Vieux Fort, will want to make amends.

Meanwhile, last Wednesday evening’s match between Micoud Hustlers and Morne Gladiators went down to the wire. The Morne secured a 77-73 overtime victory. Micoud put up a valiant effort but were unable to convert in the final minutes of overtime.

Casson Augustin contributed 27 points and 6 rebounds for Micoud while Sharmoir Jn. Baptiste led the way for the Morne Gladiators with 18 points, 5 rebounds and 4 assists.

Marlon Samuel continued his impressive performance this season with a double-double of 16 points and 13 rebounds.

One match was on the card last Monday evening with Basketball for the Future (BFTF) taking on Courts Jets Co-ed team in what was a one-sided affair.

The 83-28 blowout victory for BFTF was led by KFC Player of the Game Ron Du Murville with 27 points, 6 rebounds and 8 steals. Du Murville, both an NBL and Commercial League standout, returns to competition following a year’s absence.

Daniel Regis led the way for Courts Jets Co-ed with 6 points and 5 rebounds.

No Courts Jets player was able to score double figures.