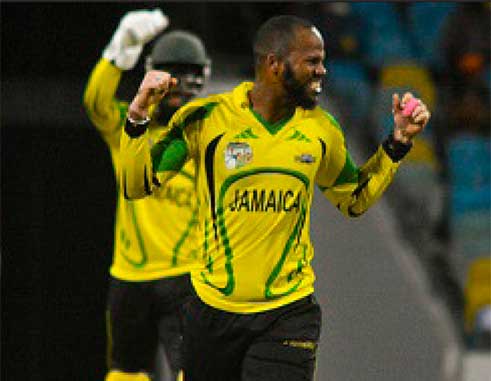 BRIDGETOWN, Barbados, CMC – Jamaica Scorpions were lifted by John Campbell’s strong all-round performance as they took their biggest stride yet towards the semi-finals of the Regional Super50, with a 20-run win over Guyana Jaguars here Tuesday night.

With unbeaten Barbados Pride already qualified for the next round, Scorpions and Jaguars entered the day/night contest at Kensington Oval knowing that victory would put the winner in pole position to take the remaining spot from Group B.

Opting to bat first, Scorpions rallied to 255 all out with two balls left in the innings, courtesy of opener Steven Taylor’s career-best 86 off 82 deliveries. Andre McCarthy lashed 45 while the left-handed Campbell weighed in with a swift 42 from 46 balls.

Left-arm seamer Raymon Reifer led the Jaguars attack with four for 35 and was supported by pacers Ronsford Beaton (2-33) and Chris Barnwell (2-45) who claimed two wickets apiece.

In reply, Jaguars took a stranglehold on the encounter through half-centuries from opener Assad Fudadin (57) and number three Reifer (54) as they cruised to 124 for one in the 19th over.

But reckless batting, coupled with off-spinner Campbell’s four for 43, triggered a decline as Jaguars crashed to 235 all out off 49.4 overs.

The result moved Scorpions to 18 points and installed them as firm favourites to reach the final four while Jaguars, third on 13 points with one game remaining, saw their hopes all but disappear.

Scorpions were forced to fight back from early after finding themselves two down for 39 runs in the seventh over, when Chadwick Walton (6) skiedReifer to Steven Jacobs at mid-off in the third over and Test batsman Jermaine Blackwood (5) also fell to the same combination.

Left-hander Taylor then fashioned his maiden half-century, as he repaired the innings in a 90-run third wicket partnership with McCarthy.

When McCarthy perished in the 27th over, Taylor added a further 25 with Devon Thomas (17) before finally going by the run out route in the 30th over, with triple figures beckoning.

Campbell then injected the energy required, hitting two fours and a six while putting on 28 with Thomas for the fifth wicket and 47 for the sixth with Rovman Powell (24).
Jaguars made a purposeful, if not spectacular start, with Fudadin and Rajindra Chandrika posting 34 off 40 balls for the first wicket.

Against the run of play, Chandrika was run out for 13 in the eighth over but Reifer joined Fudadin to stabilize the run chase in a 90-run partnership.

Without warning, Fudadin was run out in the 29th over and inexplicably 17 balls later, captain Leon Johnson holed out to long-off off McCarthy.

Reifer reached his second half-century of the tournament in the 34th over but like his skipper, then needlessly picked out long off with Campbell, as Jaguars lost six wickets for 41 runs to decline to 165 for seven in the 41st over.

With the game all but gone, Veerasammy Permaul clobbered four sixes in a cameo 29-ball 39, providing a flicker of hope in a 59-run eighth wicket stand off 41 deliveries with Anthony Bramble, who made 30 from 21 balls with a four and three sixes.

With 32 required from the last three overs, Permaul top-edged a heave at pacer Jerome Taylor and was caught at the wicket in the 48th over and DevendraBishoo (0) and Bramble fell in quick succession, to leave Scorpions celebrating.