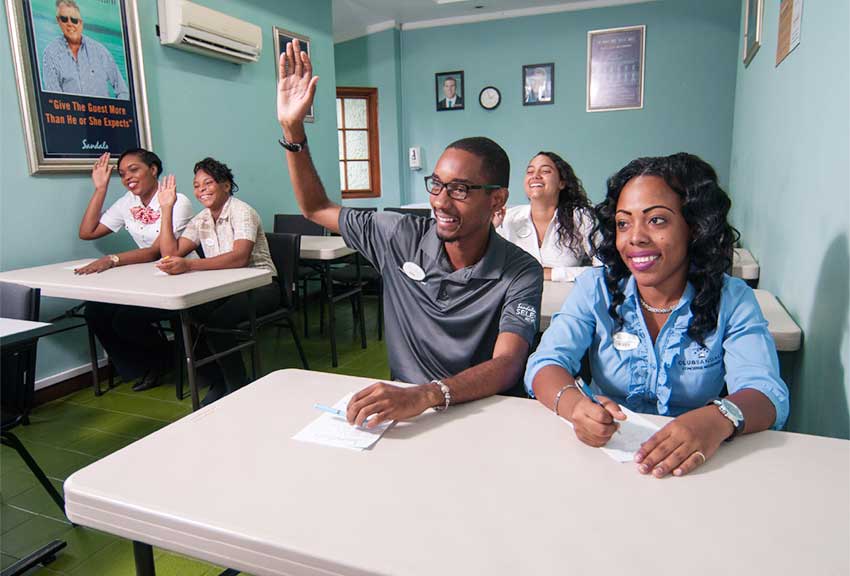 SANDALS Resorts says it is in support of calls for more education and training opportunities for hospitality industry staff, which can help avert ”unscrupulous” activities by some employers.

The statement came in support of recent complaints about poaching of employees in the hotel sector.

Sandals said it noted the ongoing discussion about the reported poaching in Saint Lucia and the Caribbean, and the deleterious effect this can have on hotels that have taken time out to invest in training.

It added: “While Sandals does not condone such activity – which we insist is both unethical and fragmenting – the importance of high quality training programmes, an attractive brand and competitive terms of employment can go a long way in helping guard against such activities.

“Here at Sandals, the company is proud of the fact that we allow all team members to access training and certification at the highest levels through our Sandals Corporate University, including offering scholarships to pursue degree programmes up to the doctorate level. Furthermore, in recent years we have trained over 1,000 young men and women of Saint Lucia through our Hospitality Training Programme at no cost to the participants”.

The hotel chain which is planning a fourth resort here, said it was “this investment in the development of the human resource capacity of the various territories in which we operate, that has allowed Sandals to immunize itself from any extensive poaching from large, foreign hotels, even though we have had been made aware of specific instances where contact was made with employees of Sandals at various levels”.

In spite of this, it added, Sandals was pleased to announce that while the company did experience a small level of movement away from the hotel within the past weeks, those positions were immediately filled by young, competent and exuberant citizens of St. Lucia, many of whom were trained by Sandals, and this has allowed operations to continue unaffected, and in many instances our service has actually improved!

It said: “The fact is there remains a keen desire by persons to work for a world-class regional brand – Sandals is after all a Caribbean-born company, one that has been voted World’s Best for the last 21 years, and a three-time winner of the Award for Excellence in Human Resource Development at the annual St. Lucia Business Awards. This is an initiative organised and produced by the Saint Lucia Chamber of Commerce. It is also important to note that Sandals team members don’t just get a salary – our employee engagement activities and employment terms offer life insurance at no cost to the employee, along with pension and health (including dental) insurance benefits.

“As such while Sandals has, for the most part, been able to resist efforts at poaching, the company is cognizant that many of our partners remain vulnerable to this dishonorable practice”.

Sandals said it was clear that some of the larger, foreign brands simply did not have the capacity to train, nor did they care to invest in training, which had led to the concern expressed by the CHTA about them enticing workers away from established organisations that have invested in building the tourism sector over many years.

It said: “Many of these workers may find themselves in an environment that does not offer opportunities for further development – like Sandals provides with the SCU – which means that their personal growth may be stunted unless they take money out of their own pockets to invest in training and development.

“Sandals Resorts therefore readily support the calls being made by Prime Minister Chastanet and other industry stakeholders for more focus on education and training opportunities within this sector, which contributes to over 41% of the country’s GDP, expected to rise even further by the end of 2017, and which can help fend off unscrupulous activities by certain players within the sector.”

Meanwhile, the newly-opened Royalton Resort and Spa has responded to charges that the hotel has been ‘poaching’ staff from other hotels.

General Manager Andre Dhanpau told reporters he was not sure why such an accusation would be made, recalling that several months ago the resort advertised for staff and received 6,000 applications.

Dhanpaul said the applicants were shortlisted and some 2,500 were interviewed.

“You can’t stop people from moving from company to company – so poaching would be us calling and trying to bring people over. People applied of their own free will, as I did as well,” the Royalton official stated.