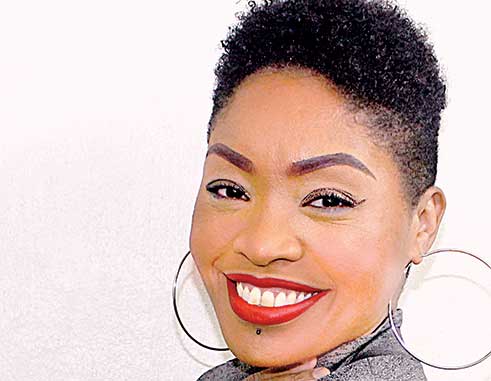 OSCAR Award-winning American actor Denzel Washington once summed up what the main objective of acting a part is: “It’s simple: you get a part. You play a part. You play it well. You do your work and you go home.” Sounds simple, right? Obviously, Washington needed not mention that playing any part comes with great measures of preparation, persistence and patience.

Actress Natalie Laporte understands Washington well enough to know exactly what the quote means. Growing up, he was one of her two favourite actors — Meryl Streep being the other. They both still are but she also has a strong admiration for Leonardo di Caprio and her favourite movie is “Braveheart”, starring Mel Gibson.

The thirtysomething La Clery, Castries native recalls her mother, Rebecca, having high standards and preaching to her children that if they were going to do something, they must do it well or just never waste their time doing it.

Laporte attended Gordon & Walcott Memorial Methodist School before leaving there in Stage Three to enrol at Canon Laurie Anglican Infant and Primary schools. Around age 11, she was introduced to the arts, especially on Sunday afternoons when her family sat at home and watched a programme on television called “Movie Magic” on Discovery Channel. Something magical happened to her while watching that programme that caused her to want to become an actress.

“Many things about that programme interested me at the time, especially the fact that there was so much happening behind the scenes,” Laporte tells me. “I could not believe that people dedicated so much time, energy and focus to make something so beautiful. So that inspired me.”

She later attended St. Joseph’s Convent and then Sir Arthur Lewis Community College (SALCC) but remembers being up all night during her high school years watching television while her mother and siblings slept. Her interest in movies continued to grow intensely as did her adulation for Washington for his natural transformation to each role. Her mission was to find out how he did it and apply it to her budding interest in the craft.

At age 17, she met director Helen Camps who in short order told her that she was a natural actress. Camps invited Laporte to her home to read for a play, “La Chunga”. When Laporte saw the other accomplished actors around, she was intimidated at first. However, she remembers a silent voice telling her to just be herself and be authentic. The long road ahead had just begun.

“Helen was also a psychotherapist so she approached the script with an investigative eye. I eventually got a part in the play after nearly four months of rehearsals. Without Helen, I don’t think I would have had a true understanding of the craft,” Laporte explained.

After the grand opening, patrons were taken aback when Camps told them that it was Laporte’s first performance before an audience. However, Laporte was not satisfied with the huge praise she was getting because she felt she could have exceeded the potential she had at the time. After a few showings of “La Chunga”, Laporte teamed up with Camps right away on the second production, “Mary Could Dance”, touring Ireland and England for showings there.

“Derek has his little circle of people. If you’re in it, you’re pretty much stuck there until you tick him off. So Larry Bain, who was in the circle, vouched for me and after a few nervous moments and scenes, Derek became sentimental, wiped his eyes and said, “You made me cry. You have the part,” she said.

Laporte said she loves good scripts and directors who take their time to rewrite scripts and work with their actors because the goal is to create a finished product of which one can be proud and one that can last. At its best, she said acting has taught her to empathize, thus making it easier to deal with even the most difficult people.

“It’s not always easy being positive despite the negativity that prevails,” she said. “But I have had the fortune of having positive reinforcement circling my entire life, especially through my involvement in acting. The ‘God factor’ is also always around me enthusing me with light and energy. So I can’t help but pass that on to others because I know how empowering it is for one to be their higher self.”

Laporte, who is also a performance poet, is currently working on a few projects, including collaborating with other writers. She also hopes to direct a few plays. Volunteering her time to mentor young women on acting and life also plays a key role in her life. She said one of her main objectives is to pass on the magic that has transformed her life from watching art unfold to being part of its creation.

“Acting is the greatest blessing in my life because it has given me insight into what life is supposed to be like. I think true artists are prophets and it’s very heartbreaking when one of us dies without people ever understanding what we were really doing here. Artists change the way we see the world but we haven’t really evolved to see that,” she said.

There’s another famous quote from Washington that goes like this: “Luck is when an opportunity comes along and you’re prepared for it.” Laporte considers herself lucky enough to have followed her passion for her craft and credits Camps, Walcott and her peers for acting their parts in her many roles on and off the stage. She also credits her success to a simple creed: “Surround yourself with people who are like-minded. Also, make sure that everything you do gets your greatest effort and keep raising the bar.”