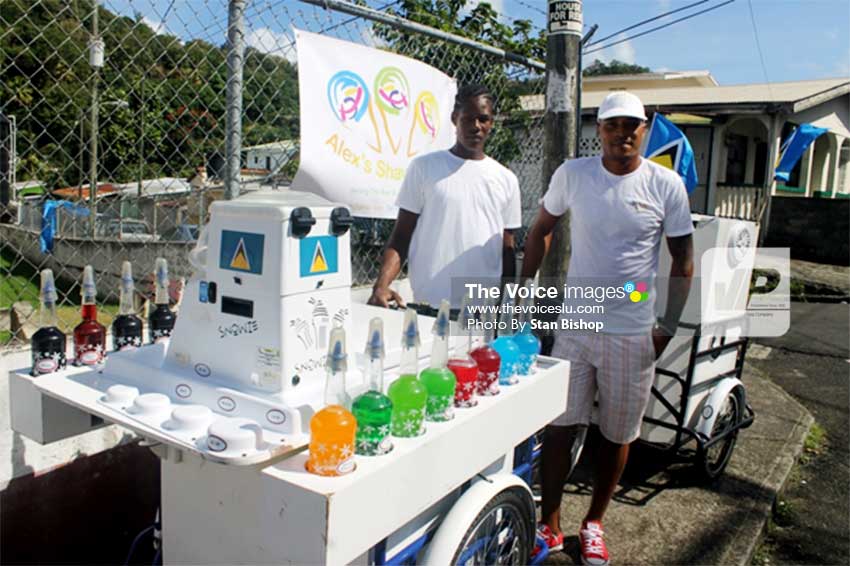 THERE’S something special about the entrepreneurial spirit of some Saint Lucians that just leaves you ice cold in your tracks. But after getting over that feeling, you begin to feel your heart warm up to the fact that anything is possible once we believe.

The life and trials of David Alexander Growth, who turned 38 last November, speak volumes about what being independent is all about. Having tried, persevered and achieved, he seems destined to soar even higher.

Originally from La Clery, Castries – where he still resides – Growth attended Carmen Rene Memorial School and passed for Vide Boutielle Secondary School at the Common Entrance exams. However, his aunt, a teacher, told his mother to have him rewrite the exam with the hope of getting another school. By that time, however, his mother decided to take him to the United States where he finished high school.

After returning to Saint Lucia for vacation, he met the woman who would later be his wife, before moving to England where he attended Hackney Community College and East London University and took up media courses. In total, he spent 11 years in the United States and 11 in England.

Four years ago, Growth returned to Saint Lucia and tried to figure out how to make the most of his talents in a gloomy economy that has recorded double-digit figures for unemployment for many years now. He did some photography for The Crusader here but that wasn’t enough to hold him steady. He decided to try something different.

“The way I saw the country was running with not many jobs available, I had to do something,” Growth said. “I realized that I had a talent for dealing with kids. I’ve been where they are, so I felt that I could show them what was wrong and right and let them decide.”

Growth began selling ripe bananas, sweets and basic school supplies such as pens, pencils, sharpeners, rulers and erasers on a small tray outside Vide Boutielle Secondary School about two years ago which helped him at the time because he had no other source of income.

On many occasions, he found himself either reducing his already low prices or giving students stuff for free, a trait that led to him becoming their favourite vendor. Despite the business not being a lucrative one, Growth was able to save $3000 which, together with the additional financial support he received from his mother, to start his sno cone business.

“I did the research online as to how I should go about starting the business. It cost me about US$12,000 to put everything together because apart from the wooden part of the cart which was done here, everything else was ordered from overseas, including the frame, engine, ice crusher, fridge, flavours, toppings, fillings, napkins and straws,” the businessman explained.

With all systems in place for the grand launch slated for Assou Square, the inverter fuse blew. With batteries donated to the cause by residents, Growth’s 20-minute stint on the first day at the New Year event netted him around $200. That small success and the positive feedback from patrons was enough to continue the journey.

“Money will come if you follow your dreams,” Growth said. “But the most important thing you need is the determination to get things done and see them happen. That’s been my experience. This dream was like a fire in my head every day I woke up and went to bed. I even used to daydream about it. That’s how much it’s been on my mind.”

Growth now works seven days a week, weather permitting, and offers 12 flavours of syrup (with 15 more on the way), 5 toppings and several fillings. While a regular sno cone (ice and two flavours of syrup of your choice) costs $3:00, additional flavours – as well as fillings and toppings — cost as little as fifty cents each. Aside from his friendly demeanour, customers are also taken aback by his use of solar panels to generate electricity for the machines and sound system on the sno cone cart.

“I usually ride down the John Compton Highway, circle around town a few times and park near the Gros Islet bus stand. However, I’m trying to get permission to sell near Constitution Park but I haven’t written the letter yet to the mayor. I want a base where everybody can find me,” he said.

About two years ago, his brother, who had recently graduated from law school, changed the family name from Alexander to Growth but decided to keep Alexander as their middle name. Today, David and his brother, sister, mother and daughter go by the new surname. It seems no mere coincidence that David has continued to build on the successes inherent in his new surname.

“I had the idea to do this in my head. But every time I explained it to people, they couldn’t see it. But the closer I got to finishing it, they were like, ‘Oh, that’s what you were talking about!’ Even my mother didn’t understand it at first, but after seeing the drive I had to do something so positive, she told me to go for it. In fact, she’s so happy now that she’s offered to buy me a Suzuki carrier truck to carry the sno cone cart around to certain events,” he explained.

With some positive signs already shooting up, Growth has already begun making plans to grow his business. He has since hired teenager, Jeanmal, whom, he said, helps him out on busy days. He also hopes to begin selling ice cream. Jeanmal, who is currently taking a refrigeration course, seems apt for the job not only for his congeniality but also for having the skills required for handling the ice machines.

Growth believes that having dreamed and lived it, anything is achievable once people make it believable and that sometimes the need for money becomes less of a priority than the satisfaction one gets from getting things done.

“Everything else falls into place once you’re determined to get things done,” he said. “Before doing this, I hardly had a dollar to my name, really, but I just had the determination to get it done. So I wish all Saint Lucians a Happy Independence and hope that we all can make our country a better place.”