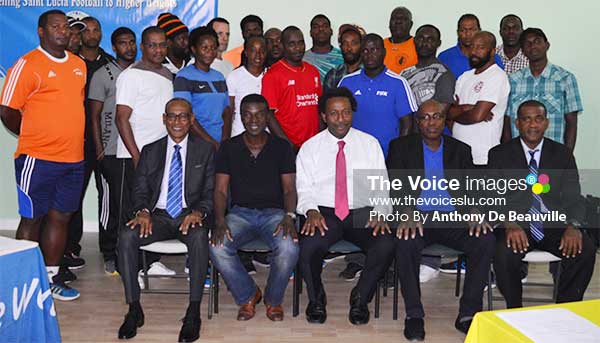 THE Saint Lucia Football Association is at it again, this time it’s a D License course. The focus of this course is to improve a coach’s ability to positively influence individual players and teams. The course consists of a series of lectures and field sessions, and attendance is mandatory for the full duration of all course which ends on Monday.

CONCACAF Instructors Lenny Lake and Vinmore Blaine is currently on Island conducting the course. Following the brief opening ceremony held on Friday morning at the SLFA new Head Quarters in La Clery. The VOICE spoke to Lake about their visit to Saint Lucia.

He said, “the D License Course; was one of the programmes that CONCACAF initiated some four years ago “to ensure we qualify coaches right across the region.”

Lake continued, “CONCACAF have initiated this programme, we started the D License which is really an introductory level targeting children ages 6 – 12. Coaches who are giving that information is qualified enough to give the right information, because good coaches bring good players.”

“We are here again in Saint Lucia to qualify over 20 coaches, it is something that is also link with Club Licensing across the region, not Saint Lucia alone that have to use qualified coaches, even in Saint Kitts and Nevis, and in Jamaica where club Licensing is now very much mandatory by all clubs, coaches would have to be qualified and not just be qualified, but seat on the bench and make decision for the team. No longer would you have coaches who are not qualified making that decision.”

He added, “You have to compliment the Saint Lucia Football Association President Lyndon Cooper for his vision and to make sure that clubs respect the decision of CONCACAF, respect the decisions of the game, because you don’t want every and anybody just coming and teaching the young players , you want people who are qualified.”

Lake is hoping as Saint Lucia continue to see this as a priority, it will reap the rewards in the long run, which would mean better coaches, better players and better teams performing successfully not only at the regional level, but maybe at the global level. He said, “CONCACAF is here for all the countries in the Caribbean to make sure we have qualified coaches. CONCACAF will always stretch it arms out to make sure that courses are available and not that you have one course and you have to wait for three years, but you can apply again once you see there is a need and CONCACAF will come to the rescue.”

Cooper also spoke to the VOICE. He said, “What we want to achieved come December 31, 2017 is to ensure that all the clubs that have made the application for a licensing can get their license. There is a check list that they must comply with and that is their constitution, an executive committee, a senior and grassroots coach. That’s all we are asking for and to ensure we achieve our long term objective goal; which is to propel football to higher heights.

Cooper said, “Once the club does not meet the basics for requirement come December 31, it means that they will fail to exist whether it’s a traditional club or long term serving club. It is not a ban; they will not exist as the SLFA structure.”