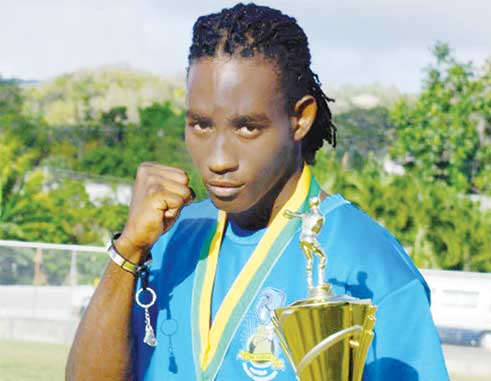 Success Would Be Historic.

WITH exactly one week to go before the staging of the 37th annual sports awards at the National Cultural Centre, boxing fans will be keeping their fingers crossed that Nathan Ferrari breaks the 30-year-old jinx which has seen no boxer capturing the “Sportsman of the Year” title.

Four nominees will be vying for the top spot in the junior male category, namely Leonce Levi (volleyball), Johnnel Eugene (cricket), Marbeq Edgar (athletics) and Nathan Ferrari (boxing). Based on their respective performances both here and overseas, their national sports federations nominated them for the award.

On Tuesday, the Department of Youth Development and Sports released the names of the final 14 eligible for the top awards, junior male/female and senior male/female sports personalities for 2016.

If successful, Ferrari will create history by becoming the first boxer in the junior category to win a Sportsman of the Year title and the second overall in 30 years. The last time a boxer won the award was in 1987 when Guy Lawrence topped the senior category.

Ferrari opened his season last February when he participated at the Guadeloupe Invitational Boxing Tournament and captured a silver medal.

In March, at the Caribbean Junior/School Boys Championship held in Guyana he not only won the gold medal, but also captured the Best Boxer of the Tournament award.

In April, Ferrari repeated the Guyana performance at the Dominica Invitational, winning the gold and Best Boxer of the Tournament award.

He captured back-to-back silver medals in May and June while competing in Martinique Invitational and Guadeloupe Club Championship.

His good run continued in July, September and December when he won gold at the 8th annual Creole Championship in Cayenne, and gold and silver at the Ronald Wilson and the Caribbean Development Championships.

Interestingly, he was the only boxer from the Caribbean region eligible for AIBA, World Youth Boxing Championship in St. Petersburg, Russia. Unfortunately, he could not attend as funding was not available for him to compete.

Ferrari put the St. Petersburg’s disappointment behind him and now has his eyes set for Tokyo 2020 Olympic Games.

He says, “I train hard, I give it my all in the gym and I will be one of the Saint Lucians coming home with an Olympic medal. All the SLBA has to do is give us the tools, give us the proper training and the proper equipment, and rest assured, the results will follow.”

Ferrari has championed the cause of boxing ever since his days at his alma mater, Sir Ira Simmons Secondary School from where he graduated last year. During his stay there, he was instrumental in helping set up and maintain training sessions.

David Christopher, President of the Saint Lucia Boxing Association, said, “Ferrari is the forerunner of schoolboys’ boxing here and his example has seen the likes of Omar Christopher, Kareem Boyce and Sherwin Mann joining him at a number of regional championships.”

Ferrari has been a major advocate for the sport of boxing. He has appeared on several radio and television shows speaking about boxing and how it has impacted his life in a positive way in terms of discipline and application, two main ingredients one needs to be successful in life.