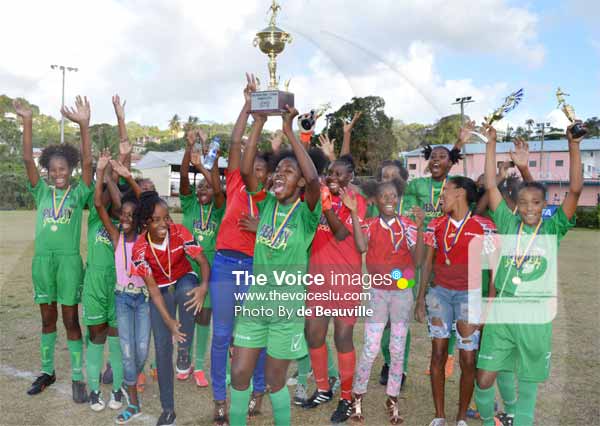 In front of an appreciative combined crowd of supporters from the north and south of the island, Vieux Fort South humbled Gros Islet 2 – 0 with goals in either half of the encounters.

With both teams coming into the final unbeaten, the girls from the south took the lead in the 33rd minute when their prolific striker No.27 Krysan St. Louis’ right foot strike eluded Gros Islet custodian Quiana Joseph to leave them with the first half advantage. This was St. Louis’ 11th goal in the tournament.

On the resumption the fast paced game slowly faded away as the mid afternoon sun played havoc on the young players including Gros Islet No.10 ShamayaManderson who had to be treated four times on the sidelines.

Vieux Fort with their 1 – 0 advantage went further ahead when their captain No.37 ShakeraClasse doubled the scoreline in the 58th minute of play and to seal the victory for her team to start a jubilation on the sideline by their supporters.

Meanwhile, for the third place silver ware Canaries despite playing with 8 players on the square defeated a highly fancied Micoud team 1 – 0. The goal came from No.11 SachaAlcide who scored in the 20th minute.