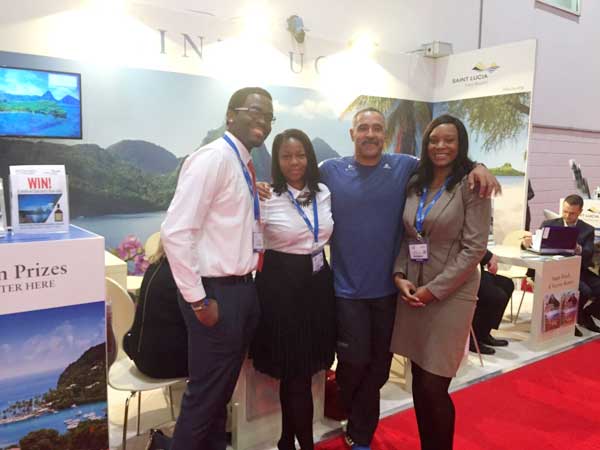 THIS year’s World Travel Market (WTM) which ended Thursday at the ExCel exhibition centre in London, saw the Saint Lucia Tourist Board (SLTB) and its partners exhibit for the full four days in what proved to be a very productive and successful week.

The Tourist Board alongside four hotel partners held meetings with UK and European tour operators, airlines and trade partners and showcased the island’s highlights, recent awards and destination news.

On Monday, the Board showcased double gold Olympic champion Daley Thompson, who was on-stand promoting the increasingly popular Tri Saint Lucia which will be taking place for the third year on November 21.

Thompson also participated in high quality media meetings, photo calls and TV interviews . \Atlyn Forde, the Director of Marketing for the SLTB in the UK and Ireland, continued to inspire trade and consumer media in a selection of dedicated one-to-one interviews ,where she updated key editors and travel journalists on the latest destination news, trade incentives and editorial angles for 2016.

The destination was also highly successful at the CTO ‘Host and Reward the Media’ event on Monday held at the Fox @ ExCel, where Saint Lucia triumphed in two out of the eight categories. Two Saint Lucia features were honoured for being the best in their category – ‘Climbing in St Lucia: the Best View in the Caribbean’ by Nick Trend for The Telegraph Online won Best Online Feature and the Best Piece of Photo Journalism accolade was awarded to Neil Price for the imagery that accompanied Phoebe Smith’s ‘Caribbean Blend’ feature in Wanderlust Magazine.

The Saint Lucia Tourist Board was invited to present the award to Wanderlust.

The CTO event was attended by over 70 UK media spanning journalists from national, trade, consumer and online outlets.

On Thursday Sales and Marketing Executive for the Saint Lucia Tourist Board, Chelcie Lewis, was presented with her own personal award – the ‘Supplier Star Award 2015’ by luxury tour operator Azure. Director of Sales of Azure, Anna -Maria Baccanello said: “Chelcie has been outstanding in her performance and the support we receive from the Saint Lucia Tourist Board is exemplary. Chelcie is very talented at presenting and she brings the destination to life with her unique combination of expertise, enthusiasm and wit.”