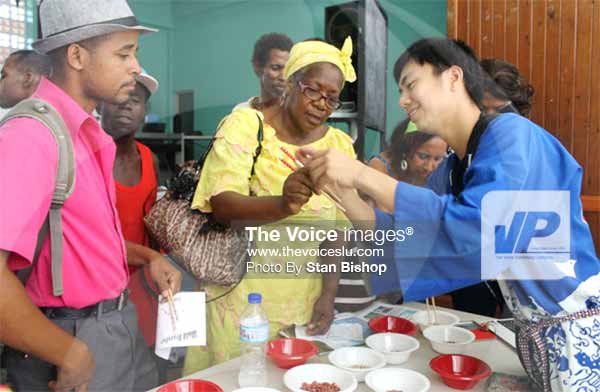 Sponsored
Share this post:
THE Japanese Overseas Cooperation Volunteers (JOCVs) gave scores of patrons colourful glimpses into their cultural traditions last Saturday when they hosted a Japan Festival at the Castries City Hall.

The JOCVs treated the audience to videos about Japan’s history and culture as well as Japan’s humanitarian on the international scene. Japanese song, dances, clothes, tea, traditional games and a karate demonstration also served to pique the audience’s interest.

But two aspects of the festival seemed to win patrons’ hearts the most: the calligraphy demonstration where patrons got their names written in Japanese by the JOCVs and the quiz competition for which winners were given souvenirs from Japan.

The JOCVs began hosting the festival a few years ago and there seems to be an increasing level of participation and attraction on the part of Saint Lucians to the festival.

Sponsored
Chiharu Torida is among the six JOCVs currently based in Saint Lucia on two-year assignments. She said the festival is about introducing Japanese culture to Saint Lucians with the hope that Saint Lucians can get familiar with and enjoy her nation’s culture. She had much praise for those who took part in the event.

“I’m very happy that so many people came to the festival,” Torida told The VOICE. “They seemed to enjoy the performances. A lot of them know a lot more about Japan than I expected. So I was a bit surprised.”

Torida said that while the event usually has its fair share of enthusiasm, this year’s festival has an even greater significance. This is because this year marks the 20th anniversary since Japan opened it Japan International Cooperation Agency (JICA) office in Saint Lucia.

Over the past two decades, Japan has played an integral role in the educational, fisheries, agricultural and other sectors of Saint Lucia through financial and technical assistance.
Sponsored | Article continues below
Share this post: