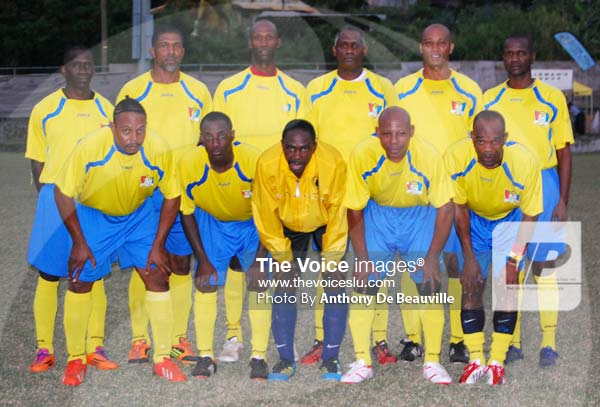 DEFENDING champions Caricom Masters kicked off the 2015 Veterans Football Tournament with a convincing four goals to nil win over Prophets and Kings on Sunday evening at the Phillip Marcellin Grounds in Vieux Fort.

Caricom Masters were led to victory with goals from Alvin Malaykhan 7th minute, Roger Celestine in the 43rd minute, Vaughn Dave Lewis in the 66th minute and Julian Joseph in the 90th minute.

The other encounter of the evening was not played as Lancers FC could not field an eleven for the start of the game and Anse La Raye were awarded a 3-0 default win. A substitute friendly encounter between Anse La Raye and a mixed team of Lancers Vieux Fort South players was held instead.

In the second encounter Congorians won over Micoud Veterans 3 – 0, a score line which did not reflect the overall picture as Congorians completely dominated the match but in the process squandered several other opportunities .

The goal scorers for Congorians were Kenton Vitalis in the second minute, AgustusAlcide in the 14th minute and GravenayVitalis in the 30th minute.

The matches will continue this coming weekend, again at the Phillip Marcellin Grounds. On Saturday November 21 from 6:00 p.m. Nyah versus VSADC and at 8:00 p.m. Caricom Masters will play Laborie Veterans. On Sunday 22, from 5:00 p.m. All Blacks from Dennery plays Soufriere Veterans and at 7:00 p.m. Prophets and Kings will play Vieux Fort South.