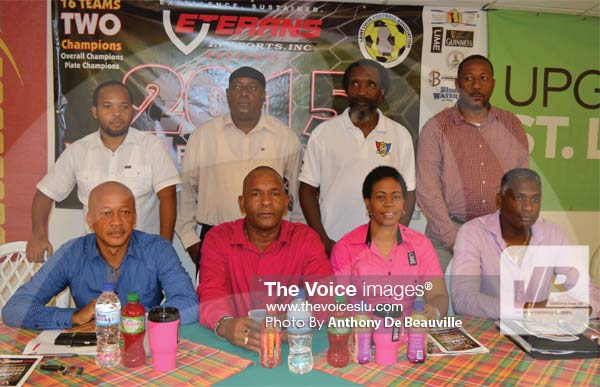 THERE was only standing room available when the 5th edition of the Veterans Football tournament organised by Veterans in Sports Inc in Association with the St. Lucia Football Association was officially launched on Wednesday evening at the Beausejour Cricket Ground with representatives from all the participating teams and special invited guests present.

“Our time, we never quit” is this year’s theme. A total of 16 teams will be competing with two champions being crowned, an overall champion who will lift the Caribbean Alliance Cup and a Plate champions.

This year the tournament has a new and exciting format with the teams playing each other on a round robin basis in the groups. The top two teams then move on to the next stage of the tournament on a knockout basis until an eventual champion is crowned.

What will also happen this year is that the teams finishing third and fourth will move on to another stage of the tournament on a knockout basis until a winner will be crowned as the Plate champions.

This year the Veterans Tournament is being organised in partnership with the governing body of football on the island, the St.Lucia Football Association whose President Lyndon Cooper said he was delighted to be working in partnership with Veterans in Sports Inc in staging the tournament.

Cooper said, “Without any hesitation we applaud the effort of Veterans in Sports Inc for this wonderful gesture,. For us at the SLFA it is not an incident, it is not a factor, it is a policy direction we have taken in the last eight years. The new partnership is one the SLFA anticipated, in 2014 when I proposed that once Veterans comes as part and parcel of the SLFA i am prepared to allocate EC$40,000.00 to the tournament.