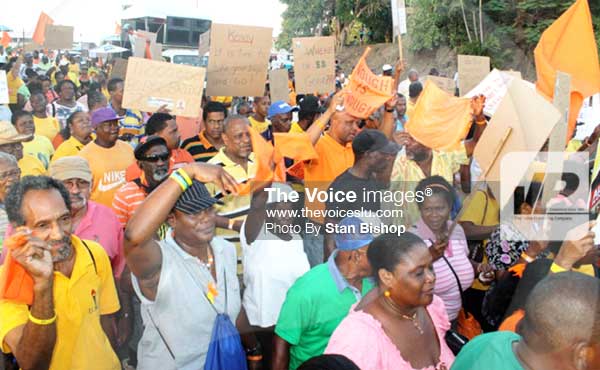 ALLEN Chastanet’s United Workers Party (UWP) has certainly taken more twists and turns in the past four years. More twists and turns than the west coast road that runs from Anse la Raye through Canaries and ending in the town of Soufriere, which Chastanet himself seemingly moved heaven and earth in his failed attempt to represent in Parliament nearly four years ago.

Hardly a reporter in this country goes through the day not expecting some bombshell of sorts coming out of the Flambeau camp. Whether it’s Chastanet himself challenging the government about its economic and social policies, Guy Joseph grinding his battle axes with the minister who succeeded him, or Stephenson King, Lenard “Spider” Montoute and Mary Polius crying foul over the party executive’s high-handedness, newspaper pages, radio and television newscasts are having a field day.

The latest twists and turns in the Flambeau camp precipitated by last Sunday’s nominations session for the upcoming party convention are prime examples that the party is not ready to unite for the greater good of itself or its supporters. Following two years of what Chastanet described as a period when King did nothing much to pull the party together following a pathetic loss against the Saint Lucia Labour Party (SLP) in November 2011, Chastanet was given the mandate to do exactly what he accused King of not doing. Has he done so?

While the party leader himself boasts about reenergizing the party’s base by resurrecting long-dead constituency councils and having meetings more frequently, the rifts are becoming more apparent. King, having faced defeat for the leadership of the party, was replaced as Leader of the Opposition in favour of Dr. Gale Rigobert. The irrepressible Richard Frederick became the second casualty of the proclaimed neo-Flambeau movement that seems bent on the “either you’re in or you’re out” mantra. The rifts are clear as crystal even though the party continues to insult our intelligence.

But last Sunday’s nominations proved that the very party that is vowing to put an end to Kenny-nomics is so divided among its own high-ranking members that one wonders just what goes through the delegates’ minds when it comes to voting. Heck, one has to wonder just what is actually going through the minds of those disenchanted voters who keep accusing Labour of not working hard enough to deliver on its promises. Yet again, we are caught between a rock and a hard reality.

Listening to King’s speech these days, one is led to believe that the Flambeau delegates are being manipulated. Using words such as “flawed” and “manipulated” to describe the democratic process being undertaken to choose a new executive next month, King has virtually called out his fellow party members for major infractions to that process. As always, nothing beats producing evidence of allegations when it comes to local politicians, even if they know such evidence does exist. Until the system is fixed, King has vowed to stay away from the party’s nominations process.

That King would decline a nomination for the leadership of the party he joined over 30 years ago is – to me at least – not that surprising. I mean, he deliberately shied away from the nomination process last year, leaving Dr. Claudius Preville to test Chastanet’s strength. Many of us anticipated that he would have waited until the very last national convention to throw his crown into the race, anyway. But with Chastanet seemingly a popular candidate among the delegates, who’s to say that the party would not forego next year’s convention, anyway? Who’s to say that Prime Minister Dr. Kenny Anthony does not call general elections before the party’s next convention? King’s high stakes gamble might well cost him the game.

Maybe King feels outnumbered. But not Sarah Flood-Beaubrun, the former SLP two-term Castries Central MP, who seems confident that the best man to lead the UWP out of its political quagmire is a woman. After all, Flood-Beaubrun comes with a wealth of political experience, including having the gusto to challenge her own government MPs (and be fired for doing so), later becoming a member of another party, the Organization for National Empowerment (ONE), and finally joining the UWP in 2006. The fact that she’s multi-coloured proves that she probably takes the entire electorate’s concerns into consideration.

But one gets the impression that Chastanet views Flood-Beaubrun as simply a walkover in much the same way that the Member for Vieux Fort South considers – albeit tactfully – his chosen adversary, Dr. UlricMondesir, who was recently named to contest that seat. But what sets Flood-Beaubrun apart was that she went out with an unrelenting fight when she chastised her government for its abortion policies. King, on the other hand, really didn’t fight too hard a fight when he made that passionate plea at the Marigot convention two years ago. In fact, King now has the indisputable accolade of doing everything to force the party’s hand to fire him knowing well that it wouldn’t. That might well be his best poker chip at the moment.

Notwithstanding all the shenanigans besieging the UWP, both King and Flood-Beaubrun are invaluable poker chips for a party that needs all the healing it can get. Surely the party cannot continue to be Chastanet’s kingdom to rule at whatever cost. And with Montoute, King and Mary Polius declining nominations last Sunday, it’s anyone’s guess whether the party’s main faction would even anoint them as candidates for the next general elections.

All things considered, though, as I’ve said on previous occasions, I would really love to see a formidable UWP. Despite the confidence being expressed by that camp concerning the next general elections, the electorate deserves credible evidence from the SLP, UWP and LPM that the party they paint their fingers red for has some semblance of unity, decorum and good governance. Saint Lucia is already facing way more than its fair share of external pressures to have internal party wrangling interfering with the business of governing the people. If the elected think that they can take their own time to mature, then the electorate will have no choice but to keep recycling political parties, whether they like them or not.

Much of what the UWP is trying to convince us about these days rests on this afternoon’s protest march to lambaste the SLP’s (mis)management of the nation’s economy. King has already said that while he supports the march, he will not be suiting up to join it. It remains to be seen whether other breakaway or disenchanted party members really do sympathize with the people they use as reference when decrying the government’s policies will stand up with the people today. Something tells me that Flood-Beaubrun is willing to walk her talk today, though. As to whether Montoute, Polius and the others will join in, that’s their business.

With unemployment at a staggering 25%, high cost of living increasingly creating migraines, criminality still plaguing us and a public debt hovering around $2.7 billion, one can argue that the incumbent SLP has not done enough to steer the nation’s ship out of the tempest. With three consecutive years of negative growth on its report card, among other failings, the SLP should at least be shuddering in its boots in the lead-up to the next general elections. But with its adversaries quarreling more among themselves than with the government, many Saint Lucians are already sensing another term for the sitting government, whether they like it or not. Sadly, there’s just too much fire in the Flambeau camp.

Telling the Flambeau camp members at this point to put aside their many grievances might be a futile endeavour. If even agreeing with each other on simple matters – as basic as respecting each other’s opinions – cannot be achieved, then the current make-up of the party might just be cosmetic. This country needs real leadership that can confront the real challenges that pop up daily. What we definitely do not want are politicians themselves debasing the very politics they blame others for giving a bad rap.

If you asked me, voting in the next general elections should be done based on these politicians’ performances and attitudes and not necessarily their political advertisements that profess to care about what they think the people really want.