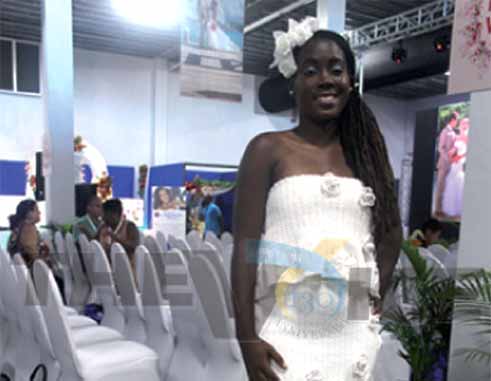 FASHION designer, Marcella St. Omer, has found herself a dream job, the fruits of which she’s seriously looking forward to seeing walk down the aisle. And with the rave reviews she’s being receiving for her creative crotchet wedding dress lately, the success she’s seeking is just a crotchet needle, some yarn and a few more eye-catching designs away.

St. Omer started crocheting when she was just eight years old. However, as she grew into adulthood, the daily routine of holding down a job and motherhood forced her to put down her needle and yarn for quite a while.

Years later, when she was close to retirement, she decided that since dress designing had always been her passion, she would pick up where she had left off. A dream deferred soon found pieces of yarn threading through St. Omer’s crochet needle once again and back to doing what she’s always wanted to do.

I caught up with St. Omer as she participated in this year’s Love Elevated Wedding Symposium held last week and organized by the Saint Lucia Tourist Board (SLTB). Having attended the event as a casual observer last year, she set the goal of creating a wedding dress from crochet. The crochet wedding dress she had on display at the Johnson’s Centre last week fulfilled that dream.

“This is the first time I’ve actually made a wedding dress,” St. Omer tells me. “I spent a great deal of time making this dress. I didn’t do any drawing of the pattern. The whole thing was in my head. But as I went along, I just knew what I was going for and that the dress had to be eye-catching.”

Buoyed up by the positive feedback she’s been getting from some of the over 60 international travel agents and hundreds of patrons who attended the wedding symposium last week, St. Omer said she’s now thinking of taking up fashion designing full-time. Even Facebook comments have been encouraging for St. Omer’s work.

“I’ve been getting wonderful responses from people who tell me they love the dress. Many of them say it’s a beautiful dress,” St. Omer said.

Sponsored | Article continues below
St. Omer said she sees possibilities for her small business, due in part to her participation in the symposium. However, she concedes that she still needs to work on getting her business cards printed and networking more. And with the few workshops she’s done with the Office of Private Sector Relations (OPSR), she’s looking forward to doing some exporting through that channel.

There seems to be a seamless pattern that runs in St. Omer’s family. Her husband, Alwyn, is a costume designer and her father-in-law, the late Sir Dunstan St. Omer, made quite a reputation for himself when he designed the national flag of Saint Lucia.

Among her other dreams is having an international celebrity get married in one of her crochet wedding dresses. The other is seeing a fashion model rip the runway in one of her dresses at next year’s Hot Couture. With over 3,000 couples choosing Saint Lucia to tie the knot, St. Omer might just get her wish because she seems intent on following her own advice: “Don’t ever give up on your dreams. Follow your dreams and try to keep them simple.”

The self-described “Crochet Goddess” said she also sews, but she prefers crocheting. She also does skirts, bathing suits and bags. She also welcomes orders for special items.

For more info on St. Omer’s creations, go to her Facebook page, House of St. Omer.