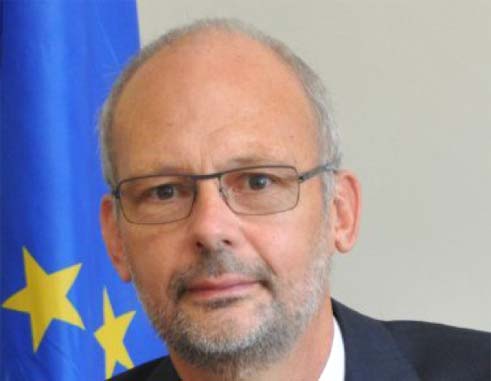 CARIBBEAN leaders have been challenged to show more courage, launch a public debate and lead the way in the fight against the death penalty.

The call came Friday from Mikael Barfod, EU Ambassador in Barbados on the occasion of European Day against the death penalty. His statement read:

“As we commemorate the European Day against the Death Penalty on October 10th, the abolition of the Death Penalty remains a key objective for the European Union’s human rights policy. We are therefore pleased that there have been no executions in Barbados since 1984! The last execution in any of our countries was seven years ago (in St. Kitts and Nevis) and Grenada has not had an execution since 1978!

“We are acutely aware that the Death Penalty remains on the books for Barbados and the Member States of the Organization of Eastern Caribbean States (OECS) for historical reasons. However, changes are occurring. The mandatory Death Penalty was discontinued in the OECS countries due to the 2002 Eastern Caribbean Court of Appeal ruling which deemed it unconstitutional. We congratulate Barbados on the initiative to also abolish the mandatory Death which is almost complete. In line with this tendency and given the existence of a de-facto moratorium because of the length of time since an execution has been carried out, the next step should be taken: accepting a legal moratorium.

“With the increase in crime, particularly murders, in recent times, there have been renewed calls for the Death Penalty. Despite the support that the use of the Death Penalty still receives in Caribbean communities, I challenge leaders to show more courage, launch a public debate and lead the way in the fight against the Death Penalty.

“The EU sees the Death Penalty as cruel and inhumane, and scientific research has shown that the Death Penalty in no way acts as a deterrent to crime. Its abolition is essential for the protection of human dignity, as well as for the progressive development of human rights. This is a moral issue about the value of human life. As a deeply religious Caribbean society this is one of the basic tenets that as a community we hold dear. Sentiments such as ‘it is cheaper to kill them than to keep them in prison’ have no place in this era of civilization.

“There is a worldwide movement against the Death Penalty and even here in the Caribbean it was abolished in Suriname – your fellow CARICOM Member State – in March of this year! In the region, Haiti and the Dominican Republic have also abolished capital punishment. The historic milestone of over 100 death penalty free countries has been achieved!

“The international outcry against the Death Penalty is also well present in the United Nations (UN) framework of which we are all apart. In 2007 the UN General Assembly adopted a resolution establishing a moratorium on executions with the goal of abolishing the death penalty, and every other year such a resolution is put to vote. I take this opportunity to urge your leaders to vote in favour of such a moratorium or at least to abstain, instead of voting against it, reflecting the situation of no executions on the ground for almost ten years!

“For those who may yet be not convinced, I make a call for a debate between the stakeholders, including the church and the legal fraternity. Let us put the facts to the test and come up with a position based on principles and not on emotions and historical customs. The EU remains strongly committed to this fight