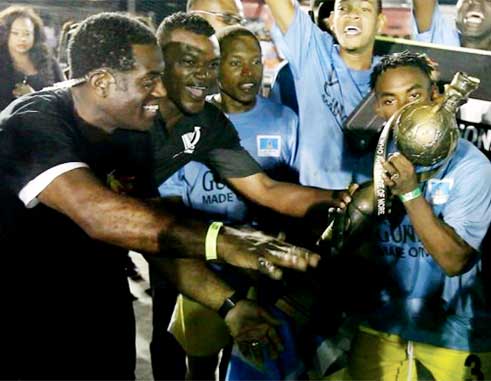 ST. LUCIA’S Veterans brought the curtains down on the Guinness Street Football Challenge in fine style when they whipped Barbados 4 – 1 to be crowned regional champions at the Waterfront in Kingston, Jamaica on Sunday.

Having finished fourth in Group B during the round robin playoffs, the St Lucians were not considered among the frontrunners for the title, but defied the odds with the most amazing run in the knockout stage, which was filled with determination, aggressiveness, flair and goals, to become the most unlikely, yet most deserving champions.

St. Lucia started well against Barbados and was rewarded with the opening goal in the second minute when captainRomiel Felix slotted home between two defenders. Despite no other goals coming in the half, they simply outplayed their opponents by being quicker to the ball as well as being more organised defensively, forcing the Bajans to take shooting opportunities from long range.

The floodgates opened in the second half as Keiron King made it 2 -0 within a minute of the resumption and four minutes later it was 3-0 when defender Valdez Maximum scored what was probably the goal of the tournament. Having possession of the ball within his goal area, he looked up and observed that Barbados was pressing the play in St Lucia’s half of the field. So he played a deft, long chip forward that sailed over the heads of the opposition and settled at the back of their net. Felix made it 4 – 0 in the 16th minute when he emphatically slotted home his second goal of the match following a neat build-up going forward.

Barbados was so starved of possession that they rarely had many goal scoring opportunities, but did manage a consolation goal when Jamal Chandler converted a penalty in the penultimate minute (19th) of the match. They, however, would be satisfied with copping the runner-up position on their debut year in the tournament.

Speaking during the prize giving ceremony, Felix said: “To be honest we really did not expect to win the tournament but we came here to put up a good fight and in the end that’s what we did.”

He said that when the team finished at the bottom of their group the focus was about working hard, keeping together, fighting and taking advantage of any goal scoring opportunities they created.

“It feels great to be representing St. Lucia and we are more than happy to be the champions.”

Felix claimed the Golden Boot award for his five goals, all scored on the final day of competition, and picked up a cheque for US$500.00.