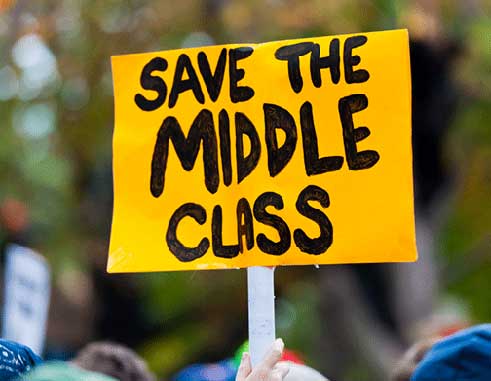 YOU may have realized that during every election cycle in the United States, presidential hopefuls on both sides of the political divide vow to defend the middleclass (a fluid group of people who are not poor but not truly rich), and often promote economic agendas promising tax relief and other incentives for that demographic. Invariably, praising the middle class has been a staple of American politics since the mid-forties, and the concerns shared by its members have echoed those of the country at large.

Barack Obama pushed for “middle-class economics” during his presidential campaign in 2008, believing that growing income polarization in America threatens economic stability and thwarts social progress. In fact, when he took office in 2009, revival of middle class jobs was one of his mantras. In a “State of the Union” speech in 2015, President Obama explained, “Middle-class economics means helping working families feel more secure in a world of constant change. That means helping folks afford child care, college, health care, a home, retirement – and my budget will address each of these issues, lowering the taxes of working families and putting thousands of dollars back into their pockets each year.”

In many developed countries like the UK and Germany, political parties are often elected to office on a “middle class” campaign pitch. In burnishing their economic credentials, they strategically focus on the strength of the middle class as a stabilizing influence on society as well as a source of economic growth. Historically, the middle class has been at the forefront of great social causes. In France, for instance, the middle classes helped drive the French Revolution that overthrew the monarchy and established a republic.

The corollary is that a strong middle class comprising teachers, doctors, entrepreneurs, supervisors, managers and other professionals, forms the backbone of an economy and provides a stable consumer base (a source of demand for goods and services) that drives productive investment. Against the backdrop of rising inequality, it is middle class workers who grow the economy and promote the development of human capital and a well educated population, not the rich. Further, the strength of an economy can be measured directly by the strength of its middle class, which usually translates to better governance, bigger tax intakes, deeper credit markets, and greater spending in social sectors, such as public health and education. Moreover, a strong middle class supports inclusive political and economic institutions, which underpin economic growth.

Yet, though often mentioned in political speeches and policy proposals, the term is famously difficult to define and can mean different things to different people. In fact, the common measures of what constitutes middle class vary significantly among cultures.

Germany, a country with a religious fervour for the working class, has taught us that if you want a thriving middle class, you need to build an industrial base. In America, education plays a role in who is deemed to be “middle class”. “Having long-term financial security by staying out of debt, balancing spending with income, and saving for the future” was chosen by the American Enterprise Institute as the best indicator of whether a person falls into the middle class as opposed to simply owning a home and a car.

Brazilian economist Eduardo Giannetti da Fonseca, describes members of the middle class as “People who are not resigned to a life of poverty, who are prepared to make sacrifices to create a better life for themselves, but who have not started with life’s material problems solved, because they have material assets to make their lives easy.”

At any rate, alarm bells have been sounding for quite a while now over the economic plight of the middle class, especially their reduced capacity to consume. Globally, the fact that this target group is falling behind and may have now become a vulnerable class is probably a reflection of the failure of governmental policy and economic liberalism. There is evidence that the trouble started decades ago, long before the financial crisis of 2008. The financial crisis may have simply exacerbated the problem.

The Washington Post poignantly states that “the middle class took America to the moon. Then something went horribly wrong.” The British Guardian indulged our attention recently when it wrote, “Who are the new middle classes around the world? You’d be surprised how poor some are.”

Despite a World Bank report released in 2012 that revealed the middle class in Latin America and the Caribbean grew to an estimated 152 million in 2009, compared to 103 million in 2003, an increase of 50 percent, Barbadian economist Clyde Mascoll thinks that for the first time in the history of Barbados the middle class is in crisis. “Since 2007 middle-class Barbados has been under severe pressure living on a fixed income. This does not mean that poor people are not hurting because, by extension, they are hurting; because people who have more are hurting, the poor are even hurting more. Since Independence this is the first time that we are experiencing a middle-class or a middle-income crisis. It has to be addressed”.

The Jamaican Gleaner laments in a recent piece entitled: Looking Back, Looking Forward – The Dwindling Middle Class, “What many people have long accepted is that Jamaica’s middle class is in a state of flux, with most persons realistically falling in the less distinguished category of working poor or underemployed.”

The World Bank report which I cited earlier identifies three strategies which governments could employ “to gain the support of the middle class for a fairer and more legitimate social contract:”

• Explicitly incorporate the goal of equal opportunities into public policy to break the perception that the system is rigged in favour of the most privileged.

• Embark on a second generation of reforms to the social protection system — including both social assistance and social insurance — to overcome fragmentation and thus enhance fairness and efficiency.

“Some of the key factors favouring the upward mobility in Latin America were higher levels of education among workers, higher employment in the formal sector, more people living in urban areas; more women in the labour force, and smaller families.”

Understanding which policies create, expand and protect the middle class has become more important than ever. The new progressive thinking is that it takes more than economic growth to reach the middle class; targeted social policy is imperative.

Recent analysis of socio-economic hierarchy shows that entrepreneurship and invention are rooted in the middle class, and that the purchasing power of that target group is something that economic policy should seek to harness and exploit. It’s any wonder why the rise in middle-class worker productivity has generated much of the wealth in the BRIC nations, according to the International Labour Organization (ILO).

Saint Lucia is not immune from the effects of the declining middle class. If economic history is any guide, an actual rise in middle class jobs is crucial in spurring the kind of sustainable growth needed in our economy. But again, how can this happen when there is hardly any talk about the middle class. I am not even aware of the commissioning of any study to find out what is happening to that demographic and how it may have been transformed in recent years. Is the middle class in Saint Lucia the “silent majority”? Have they become more vocal politically or are they gasping for air? Do we even have an official definition for “middle class”? Whatever the answers to these questions are, let’s hope that politicians don’t see the middle class as something to create with the gains of economic growth, as opposed to an actual source of economic growth.