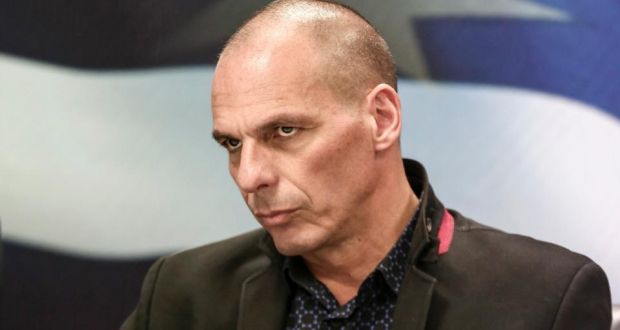 GREEK mythology culminates in the Trojan War, fought between Greece and Troy, and its aftermath. It’s now anyone’s guess how the current platonic drama unfolding between Athens and Brussels (actually Berlin) will end. It seems like not even a government ran by philosopher-kings can now save Greece from the Medusa spite of financial markets, having managed to bring the European economies to a crisis point.

Sometimes, I can’t shake the feeling that I’m watching a special edition of the European debt theatre where Greece and Germany have taken centre stage. Nevertheless, it appears the battle lines have been drawn where the Greek camp, energized by the teachings of Socrates, Plato and Aristotle, are pitted against the indefatigable Germans inspired by the resolve of Kant, Engels and Nietzsche. Having mustered the discipline to think long-term, the German economy is booming with an unemployment rate of below 5 percent, while Greece is saddled with mass unemployment, alarming levels of poverty and scant hope.

In our neck of the woods (OECS and CARICOM) where we’re faced with our own economic demons, a critically reflective look at the genesis and circumstances of the Greek Debt Crisis might help us better understand the psychology of capital markets and how to potentially navigate through the mindfields of politics and economic policy choices. Greece, renowned as the cradle of democracy, serves as an example, if a poor one, of the importance of economic governance, accountability and rule compliance in the dealings of a nation.

Play by the rules

For my part, if there’s one thing I have learned from the Greek Debt Crisis, it’s that when you don’t play by the rules, and consequently lose market trust over the handling of finances, it’s hard to gain it back. As previous crises in Argentina and Indonesia have demonstrated, markets sometimes ignore underlying facts and run mostly on psychology (confidence and trust). When a country has lived a life of political corruption and economic deceit, as has happened in Greece, it’s only a matter of time before the financial chickens come home to roost. According to a senior spokesman from the European Commission, “While no one doubts previous Greek governments dug the economic hole the country finds itself in, the debate is over how much the rest of Europe should pay for selling Greek leaders the shovels and buckets used to dig it.”

In the years leading to the introduction of the Euro in 1999, creative accounting machinated wisely by the Greek establishment was the order of the day, as attempts were made to mask the true extent of the deficit with the help of a derivatives deal that legally circumvented the EU Maastricht deficit rules. With the conniving support of Goldman Sachs, a US investment bank, cross currency swaps with fictional exchange rates and other complex financial products were devised to push part of the country’s liabilities into the future, swelling the already bloated deficit. Of further disquiet is the fact that fiscal rules (Stability Pact) governing budget deficits (not more than three percent of GDP) and government debt (not exceeding 60 percent of GDP) were craftily flaunted as monetary oversight then within the currency union was weak. Greece was run almost like a third-world country with a tax collection infrastructure that was legendarily ineffective, and a civil service shot through with patronage.

A Greek departure
To be sure, the Debt Crisis shows that Europe has been anything but unified. A Grexit (Greece leaving the euro), added to the already imminent threat of a Brexit (Britain leaving the EU), would represent a significant political defeat for the euro-zone and the EU at large. Fluid market developments have once again begged the question: Was the euro-currency idea a bad one economics-wise? Economists as ideologically varied as Milton Friedman and Paul Krugman have said all along that joining a group of quite distinct European countries into a single currency would end in tears. Now economists are busy calculating: What would abandoning the euro do to the Greek economy? How high would the costs be for the euro zone? What would be the political consequences were Athens to turn away from Europe?

Living within your means
If anything, the ongoing crisis has drawn some uncomfortable lessons about the need for fiscal discipline. It is also a reminder of the dilemma every democracy faces in balancing tax collection with citizen expectations. Meanwhile the debate over debt servicing and management is increasingly lacking proportionality, as capital in excess of a billion euros daily take flight out of the country, hurting the banking system and the economy. As evidenced by the turmoil in financial markets, debt is a contract that must be honoured; otherwise the consequences in terms of credit ratings and long-term costs can be dire. At any rate, the message to politicians is that in the long run, you can’t live beyond your means.

No free lunch
Structural reform is a serious business, particularly as it relates to taxation, pension and labour markets. When one considers the somnambulistic pace of economic reforms in Greece until now, one is left to wonder whether the Greeks have understood at all the enormity of the structural issues that confront them. The reforms proposed by the euro-zone were necessary and had to be implemented despite the amount of pain it would have inflicted on society. The reality that there is no such thing as a free lunch has already come back into fashion.

The follies of mindless austerity
One of the critical issues of European monetary and economic integration has been the reluctance and indecision of Germany in the exercise of economic leadership in the euro-zone. I would even go as far as to suggest that the present economic mess is the price the currency union is paying for five years of cowardice. The current crisis is what happens when leaders without foresight heedlessly kick the proverbial can down the road. There is no hiding the fact that plenty mistakes were made including Germany’s stubborn insistence that the pain of austerity was essential to economic recovery. Europe’s largest economy just didn’t get the balance right. The prescribed austerity should have been tempered by a growth agenda. It is now clear that seriously bad ideas have a life of their own.

The most important step should have been to get the Greek economy out of the doldrums through collective debt guarantees and an economic stabilization programme. By focusing too much on the current state of the Greek economy, the euro-zone underestimated the fiscal risks that may have threatened future growth. Even when the economy was showing signs of recovery, instead of implementing spending cuts, the first priority should have been to ensure unnecessary burdens didn’t kill off a budding economic recovery.

Early debt relief
Further, early debt relief may have helped avert the current crisis. This idea is famously supported by legendary US investor George Soros, whose speculation against the pound forced the UK to withdraw from the Exchange Rate Mechanism in 1992. Mr. Soros, who is Hungarian by birth, has called for comprehensive debt relief for Greece. “Everyone knows that it can never pay back its debt. Greece is close to a primary budget surplus after a lot of pain and suffering. And if any country were to recognize how such an approach could work, it was Germany, which ought to remember that it has benefitted from debt write downs three times, with the Dawes Plan, the Young Plan and in connection with the Marshall Plan,” he said in an interview recently.

Democracy isn’t always a good thing
Since Alexis Tsipras’s radical far-left Syriza Party came to power in January this year, the easy appeal of bad karaoke economics has been pretty disheartening to watch. Until now, the markets have not been able to tame the new Prime Minister. His government’s wrong-headed policies, including the calling of a referendum this Sunday July 5, are beyond amusement at this point; it is insanity. It is a classic example of how too much democracy is not always a good thing in the economic management of a country. According to the European Central Bank (ECB), “Prior to elections in January, the situation had been improving in the country. The government in Athens was bringing in more money than it was spending.” The Organization for Economic Cooperation and Development (OECD) recently noted the country had made “impressive headway. Now with a new government, things have come to a head where Greece is demanding that Germany make war reparation payments and also pay back loans amounting to about €11 billion which the Nazis forced the Greek Central Bank to provide during World War II.

I’m not sure what advice the earlier cited philosophers of both Greece and Germany would have provided to the current power brokers, but I can make an educated guess on one thing: ethics, reason and the moral imperative would have probably guided the debate in finding a solution to the debilitating crisis. Oh Zeus, king of the Greek Gods, how could things go so wrong?