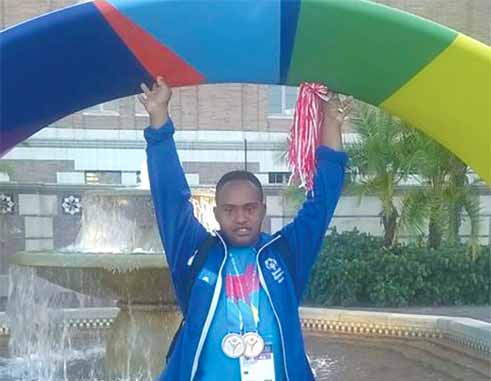 AS intense rivalry and the building of friendship continues after the spectacular opening ceremony held on Saturday, St. Lucia has secured two medals at the Special Olympics World Games currently being held in Los Angeles, California.

St. Lucia secured its first medal in the Team Category on Monday, winning Silver in Bocce after a highly competitive game against Jamaica, which St. Lucia lost 9:6. St. Lucia’s good fortunes continued in the Men’s Single Category where Cecil Fevrier defeated his opponents from Israel and Gilbralta 10:1 and 10:6 respectively. This allowed him to advance to Round 3 on Tuesday, where he defeated his opponent from Hong Kong with a score of 10:6 to secure the Gold Medal in his division.

The Singles competition continued yesterday, with the other members of Team St. Lucia seeking to medal in their various competitive categories.

On the track, St. Lucia continues to turn in stellar performances as they approach the medal rounds. In the preliminary 4x100m relay the male team of Nody Gilbert, Darwin Simon, Joshua Henry and Benvick Winifred showed their intentions as they took first place in their heat. Preliminary rounds in Track and Field continue this week with the ladies waiting to set their mark.