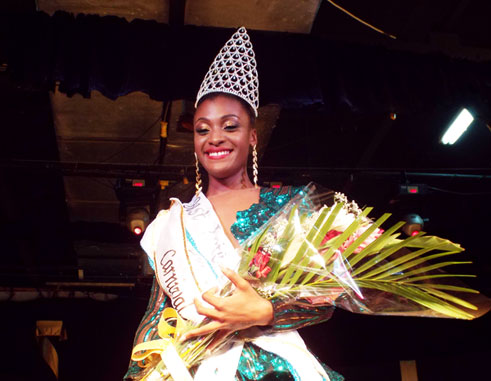 A NEW carnival Queen was crowned Saturday evening at the annual pageant held at the National Cultural Centre.

The eight contestants put on a show to an overly packed venue where every seat was occupied and a number of patrons were even left to stand along the sidelines throughout the entire show.

The work of a newly established Queen Show Committee was clearly visible as a number of new aspects and initiatives were introduced to the event including the adoption of local charities by each contestant and a four year scholarship to the winner to study in Mexico, awarded by the Mexican government.

Press Relations Officer of the committee, Louise Victor, herself a 2010 Carnival Queen, told The VOICE: “2015 is the year to redesign what a national pageant should be and we really fought for it and we would like to thank the Carnival Planning and Management Authority sincerely for going all out in ensuring that the winner got an international scholarship because this really will be a life changing event for Yvana. It’s something unprecedented and something that has been long needed.”

Victor spoke of the launch of the charity initiative which, she said, brings the queen show product beyond carnival.

She said: “The title truly is Miss St. Lucia. When you go across the region of pageants it’s Miss St. Lucia. It’s just that it happens in the carnival season that it’s called National Carnival Queen. So Yvana will have a lot to do, likewise the contestants who will be working with their charities because people usually say the Queen wins and you don’t see her after that, so there will be a lot to be done.”

Victor said the planning and works put into the event were extremely difficult but worth the journey.

Shortly after her win, the new Queen said she was experiencing a large mixture of emotions including delight and excitement.

David said at first, she was a “hard nut to crack” but her humble upbringing helped her along as she was blessed with patience. She remained grounded and she was extremely focused on getting to where she wanted to be…the Queen.

Now that she has won, she has vowed to use her new title for the greater good of St. Lucia.

“I want to be the voice for the young women. We’ve all been through the struggles and experiences whether it be unemployment or sexual harassment, I just want to be that voice for young women where I can actually help and counsel them to be better persons than they were yesterday.”

David also sent out a special thank you to her entire team for all that they did to get her to victory.

The VOICE also spoke to the winner’s proud parents. Her father, Andrew Phillip said seeing his little girl as a young lady on the stage brought him unimaginable joy and he was extremely proud of her achievements.

He said: “She used to say that she would be a Queen one day and today her dreams came true.”

The proud mother said: “As a single mother, watching Yvana grow up from kindergarten to a teenager to now becoming Carnival Queen, I feel great and felt great watching her. Yvana was confident from the beginning to the end and so was I.”

David said she is especially ecstatic that her daughter was granted the scholarship and said she would encourage her and stand behind her 100% as she pursues further education for herself.

Before the crowning of the winner, the runners up were named as:
• Iyana Alexander – Miss Super J IGA who was the first runner-up
• Francillia Austin – Miss Digicel who was the second runner-up
• Laura Bruce – Miss St. Lucia Tourist Board who was the third runner up