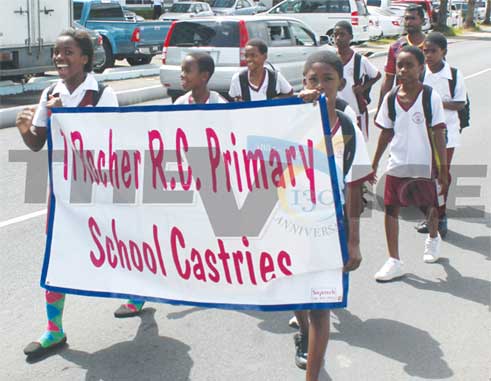 THE curtains are set to come down today on the third annual Royal St.Lucia Police Force School Sports Festival held at the Sab Sporting Facility and the VigieMulti Purpose Sports Complex with a number of finals.

The event started on Tuesday with the parade of teams led by a small contingent from the Royal St. Lucia Police Force Band from the city centre to the Sab and saw a number of schools participating in three sporting disciplines – namely cricket, football and netball.

Corporal Ted King immediate supervisor for the northern division of the Community Relations Branch of the RSLPF said: “This is the third annual sporting festival. The goal is to bring our young people together in unity, to build relationships and to be cooperative with each other”.

He continued: “The students you see here are from various schools. They do not know each other. The sporting activity is to unite them, bring them together as one and also to use sports as a crime fighting and prevention tool to help build a better society, because we have a number of issues relating to our young people at present”.

King said, a total of 27 schools from Educational Districts 1 to 4 were down to participate, unfortunately only 7 schools were present on opening day. Some of the schools are presently engaged in their respective graduations and other school activities, and were expected to turn up later, King said.