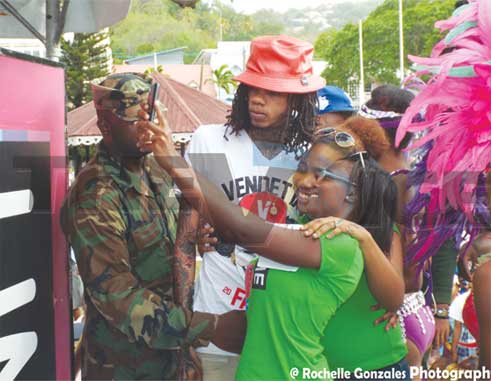 ONE of the island’s telecommunications company pulled in the crowds at the Derek Walcott Square on Thursday afternoon to launch the return of their “Big Money” Promotion.

The popular promotion which was launched a few years ago was reintroduced bigger and better for the summer giving customers the chance to win $500 twice daily simply by topping up with $15 plus VAT or by activating a weekly data plan of 250MB or 500MB.

Jn.Baptiste said: “We’re basically saying to our customers that we’re giving away a thousand dollars every day. We have over 120 customers who are winning cash and we have $70,000 cash plus prizes. We just thought that it was a really good thing to do for our customers noting everything that is going on right now and how hard things are. So what better promotion than cold hard cash?”

Present on the day was the promotion’s sponsored organisations including Toxik Carnival Band, Teddyson’s U4RIA and Outrageous In Black.

A number of acts also performed including this year’s Junior Calypso Monarchs, Cupid and the Fundamental Dancers.

The climax of the day was the brief guest appearance of Jamaican Dancehall Artiste “Alkaline”.

Not even a hiccup that delayed the commencement of the event or the four hour long wait for the appearance of the main man himself could have placed a damper on the crowd of screaming and adoring Alkaline fans.

The artiste will be headlining Toxik Nation’s “Amnesia” tomorrow.

Jn. Baptiste expressed gratitude to the Royal St. Lucia Police Force and the Castries City Council for granting the company permission to host the event in the heart of the city on a busy week day.

She said with such a promotion, it’s a great time to be signed up with LIME.