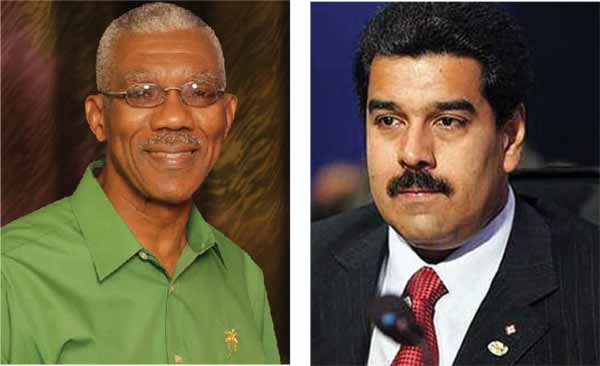 A search of the United Nations Secretary-General Ban Ki-Moon’s statements posted on his official website shows no mention of anything he said after a meeting last week with Venezuelan President Nicolás Maduro about the Guyana-Venezuela controversy. But, according to President Maduro, the Secretary-General (SG) suggested a possible meeting with Guyanese President David Granger in September, when both men plan to be in New York to mark the 70th anniversary of the United Nations.

There is everything right with talking. And if, indeed, Ban has suggested such a dialogue between the two Presidents and, presumably himself, then everyone in the Western Hemisphere should wish it well. It is past time that the Guyana-Venezuela controversy should be ended. The urgency of such an end is not only because by next year it will formally be 50 years old but because recently it has heated up, creating tension in the wider Latin American and Caribbean area.

But, a dialogue between Presidents Maduro and Granger should not be talk for talking sake. That would stall the necessity for the SG to bring the matter to a resolution to which both Guyana and Venezuela would be bound under international law. A conversation between the two Presidents should agree with the SG that the time is overdue for a judicial settlement by the International Court of Justice.

My attention was focused on this matter this week by a question posed to me by Latin America Advisor, a US-based publication, directed at decision-makers in government and the private sector, as well as academic and research institutions. The question put to me was:

“Venezuelan and Guyanese leaders have been trading barbs in recent weeks, with the government of Venezuelan President Nicolás Maduro going so far as to recall its ambassador to Guyana amid mounting tensions over a border dispute between the two nations. Venezuela has long claimed a significant part of Guyana, including areas of the Atlantic Ocean where ExxonMobil recently announced a major oil find that the government has said could be worth up to 12 times the value of Guyana’s entire economy. How will the border dispute play out, and will it interfere with plans to develop the oil find? How important was the discovery for Guyana, which currently produces no oil”?

I provided a response that met the publication’s requirements for 250 words. Below I have expanded on the answer.

ExxonMobil’s oil discovery last May is said to be at least 700 million barrels of crude oil. It is extremely important to Guyana because of the revenues that it would produce for the country and also because it confirms that that there are considerable oil and gas resources in Guyana’s waters – something that a US Geological Survey had identified as much as 15 years ago. According to a Bloomberg report, the ExxonMobil find alone would be worth 12 times Guyana’s current gross domestic product (GDP). Therefore, production from the ExxonMobil find – and others that would be sure to follow – would vastly improve Guyana’s economic situation for the benefit of itself and its partner-countries in the 15 member nations of the Caribbean Community (CARICOM).

The Energy Minister of Trinidad and Tobago (T&T), Kevin Ramnarine has already said that the ExxonMobil find “is extremely significant and presents a huge opportunity for T&T’s locally owned energy services sector”. Ramnarine declared that his country “has many locally owned and established energy service companies like Tucker Energy Services and Well Services Petroleum Ltd that could supply services to the developing oil and gas industry in Guyana. There may also be opportunities for the independent exploration and production companies in T&T like Trinity.”

The need for goods, services and people to support the oil and gas production in Guyana would be a huge gain not only for T&T, but for the economies of all the other countries of the CARICOM group which provides for the movement of skills, capital and goods by treaty.

With regard to the first part of the question posed by Latin American Advisor, “How will the border dispute play out? An 1897 treaty obliged Venezuela and Guyana (then British Guiana) to accept the result of an 1899 arbitration, setting their present boundaries, as a “full, perfect and final” settlement. The boundaries were accepted by Venezuela for 63 years until 1962, as British Guiana moved towards independence when Venezuela claimed it was “robbed” by the arbitral award. A 1966 Agreement, signed by the governments of Britain, British Guiana and Venezuela in Geneva and filed with the UN, acknowledged not a “border dispute” but a “controversy” based on the new Venezuelan assertion of nullity.

The 1966 Agreement provides for the resolution of the controversy by actions of the UN SG under Article 33 of the UN Charter. After 49 years, including 25 years of the SG’s efforts at mediation and conciliation through a ‘good offices’ process, no resolution has been found. The exhaustion of other options now leaves a ‘judicial settlement’ open to the SG. Such a judicial settlement by the International Court of Justice would settle the issue peacefully, binding both Guyana and Venezuela. That would be the peaceful, legal and internationally acceptable way to end the controversy once and for all, allowing the Guyanese and Venezuelan people to co-exist in peace and co-operate as neighbours for their own well-being and in the interest of their neighbours.

As for the last element of Latin American Advisor’s question: will the current situation “interfere with plans to develop the ExxonMobil oil find?”. In 2013, the Venezuelan Navy evicted from Guyanese waters the RV Teknik Perdana, a survey boat being used by Texas-based Anadarko Petroleum Corp, to carry out seismic surveys. ExxonMobil was well aware of that incident. Unless Venezuela intervenes militarily, ExxonMobil’s work on the oil find should legitimately continue.

But, the controversy should not be allowed to fester any longer. Peace, national development and hemispheric co-operation are at risk. A judicial settlement by the World Court based on international law and evidence and arguments by all sides is now appropriate.