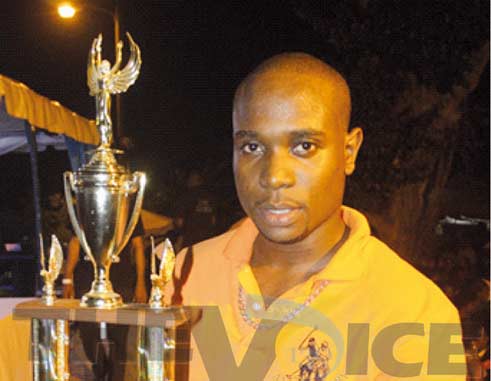 In his song, “2030”, which he wrote himself, Gaston spoke about plans and procedures that would become the norm should he become Police Commissioner in the next 15 years. Among the things that would have to go, he said, would be Jamaican police investigating local police, a clear reference to the recent IMPACS investigations conducted here.

Performing at number 14 on a card that fielded 18 calypsonians, Gaston had sections of the packed crowd singing along with him. Even after his performance, many patrons continued to shout his name throughout the remaining competitors’ performances.

Former monarch, WPCL Stephanie “Red Ant” Henry of Crime Management placed third with 355 points for her song, “Vernon”, a tribute to Police Commissioner Vernon Francois who is now on leave. During Henry’s performance, Francois made an appearance onstage.

This year’s Kaiso Headquarters marked the tenth year since the event has been organized and hosted by the Royal Saint Lucia Police Force (RSLPF). Calypsonians come from the various departments of the RSLPF. As is customary, the winner and the first runner-up will represent the RSLPF at the Inter-Commercial House Calypso Competition.