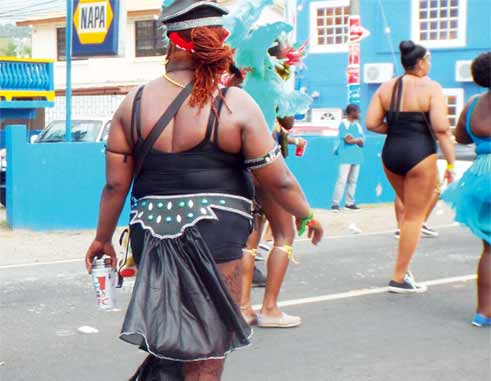 AS was expected, this year’s Carnival parade has been the main topic of Social Media in St. Lucia and as usual, the influx of negative and derogatory posts has dominated debates across the board.

Ranging from a number of issues including vulgarity, intoxication and unkempt costumes, the biggest one was the topic of full figured women who bore it all in skimpy costumes.

Two sides, those in support of and those against the said women who took part in the festivities, went head to head setting the likes of Facebook ablaze with heated back and forth comments.

Over the past few years, many have complained about the sight of women of “heavier” build in costumes deemed too small or skimpy. However, with the new wave of self awareness, where women are being implored to love and accept their bodies and with flaws and all becoming more popular, naysayers have seemingly met their match as the free thinking population is having none of the negativity.

Women as well as men have been busy airing their thoughts on the matter, stating why they believe that it is wrong to wear such costumes. They say that women are embarrassing themselves, have no shame or class and that is sending out a bad image of the plus-sized woman and leaving the public with a bad taste in their mouths.

On the other hand, both men and women have also come out in full force to say that full-figured women exude self-confidence which should be applauded and even celebrated.

They believe that it is actually the naysayers who should be ashamed and should re-evaluate their sense of tact and taste and practise respect for the said individuals.

Whilst many could not hold back their disapproval and disgust at the sight of the women parading on the streets, many fired back at the “haters” stating that the carnival was for all, big or small and that no one should judge as everyone had a right to enjoy themselves regardless of their, age, gender or size.

Below were some of the “safe” comments both for and against the plus sized revellers:

“They all look so terrible in their costumes. So sad.”

“Just so wrong in so many ways”

“Ok, I was trying not to comment, but after viewing the photos a second and third time I am forced to. We have 365 days in a year, carnival is two days and we shouldn’t judge someone based on their participation in freeing up the stresses of the 362 days. However, people should try their utmost to wear costumes that would not reveal too much of their body parts. Why would a full figured woman want to wear a skimpy costume designed for slim people? Why would they get upset when their pics are posted all over the internet and people speak about how disgusting they look? Don’t they have mirrors, or family or friends to say to them, that costume doesn’t suite them? As a full figured woman I would never wear such skimpy costumes and parade the streets. My God, I am speechless, disgusted, and ashamed of these pics.”

“Omg! This is truly horrible and those with their fish net stocking. They look like a Christmas ham. Why, why just why embarrass yourselves like that. I mean you are of a certain age or body type, please dress to suit or just admit that your time for carnival has passed.”

“I’m a full figured woman for some, I might be too big or fat but I rock my costume every damn time. I feel totally comfortable in my skin a lot more attractive with my big sexy awesome self than a lot of u woman who thinks they slim”

“So let me get this straight carnival is for skinny ppl only? U don’t want to see fat women in costume then don’t go carnival stay at ur home… Stay off social media if they sooo offend u!! These women probably more happy than a lot of u self loathing, critical, pompous *Expletive*!!!! They probably have jobs, happy with themselves and life as we know it. The critics come out to stir the fat ppl pot while leaving theirs unattended…”

“Why is it that we feel we have the monopoly on what beauty should look like? Full figured women are entitled to jump carnival the same way smaller ladies are. I may not always like to see the way their costume fit, but hey, it is not for me to judge them as long as they feel comfortable in their skin and they enjoy themselves. After all, I did not give them the money to pay for the costume, they pay for it! I do not understand the need to single out the two ladies in the pictures. We need to learn how to live our lives and let others live theirs the way they see it fit. I hope those two ladies had fun on the road!”