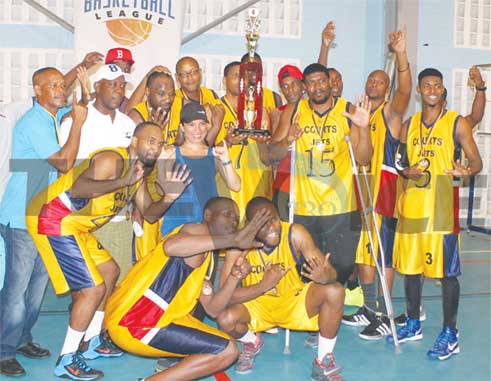 In front of an appreciative crowd of supporters the Jets took charge midway into the first quarter. They had more crowd support than VBCC. Head Coach Matthew Raphael with his thinking cap on and sipping water on the side lines, marshalled his troops wisely when it came to the resources coming from the bench and despite the fast and at times physical play the two teams gave it their all up until the final whistle to the delight of the many patrons present.

After the game, Raphael told The VOICE: “I am very happy with my boys coming from one game down. The last two weeks I stressed on the defence, because we have a number of young players, a lot of fresh legs and I try my best to give all my players, an opportunity to play within the first half”.

He added: “I am happy we won it for Zoe, one of our players who sustained an injury in the semi finals and another player who lost his mother. She was a very strong supporter of the team”.

This is the Jets sixth championship and Raphael was asked whether it was the toughest of them all. He replied: “That one was very difficult. Since we played in VBCC in the earlier round and defeated them by 20 points twice, our players thought Game 1 they would have just walk over VBCC. But it was a wake up call. Certain players were not turning up to training, but when we went down in the first game they all returned as the court. I am so happy that we came back from one game down to win the championship”.

Raphael revealed that four Jets players will retire this year. “Our intention is to have four school players added to our team. We are not taking players from the other teams. My aim is for the team to remain in the top four for the next 10 years even if we lose the tournament”, He noted.