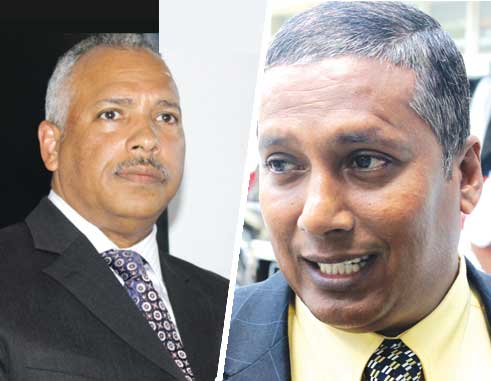 It ended with Joseph being prevented from continuing his contribution to a debate on a motion to guarantee financing of roads in the south of the island and being asked by the Speaker to take his seat.

Foster and Joseph have clashed in the House before. The two are also opponents in the High Court where Joseph is challenging the Electoral and Boundaries Commission, of which Foster is Chairman and which has recommended increasing the number of electoral seats from 17 to 21.

Joseph yesterday declared that the Speaker must “know his place” emphasizing remarks he had made elsewhere recently that Speaker Foster was not impartial when sitting in the chair.

Joseph, a former Minister of Communications and Works, was interrupted by the Speaker Tuesday while raising questions about the LaborieBanse Road project, which Joseph claimed was filled with discrepancies.

Earlier Joseph attempted to raise questions about the relationship between two signatories on the contract for the road project and was asked by the Speaker about the relevance of the question.

Foster told Joseph that he would not allow him to impute improper motives against anyone who was not a member of the House without making the proper foundation.

Joseph also questioned the content of the Bill of Quantities relating to the project claiming that the information there was inadequate. He questioned the defect liability provision in the document claiming that as worded it would let the contractor off the hook if the road proved defective on completion.

But Speaker Foster informed Joseph that a defective liability provision does not absolve a contra tor from liability and explained what the term meant. Joseph had questioned why the project liability period ended the same day that the project ended.

The Speaker’s interruptions clearly annoyed Joseph who at one point objected to what he said was the Speaker interpreting the contract for him.

The Speaker informed Joseph that he was being disrespectful to the chair and ruled him out of order. A verbal exchange continued before finally Foster demanded that Joseph take his seat.

Since then Joseph has again accused the Speaker of “behaving like a politician” while presiding at meetings of the House. It was the Speaker, he said, who was really out of order.

Yesterday, Joseph continued his criticism of Speaker Foster while discussing the House of Assembly issue. He said he believed he should have been allowed to ask more questions and get reasonable responses not from the Speaker, but rather from the government.

Joseph said he was not disrespectful to the Speaker, but instead advised him that if he wanted to join the debates he should become a politician, but if he wants to be Speaker he had to be fair and unbiased.

Said Joseph: “When I tried to bring up a point, he (Foster) said we are not debating things of the past. But every time the government goes and digs up something that happened 20 years ago the Speaker allows it.”

Joseph said he was not going to continue going to Parliament to be pushed around by the Speaker “who was not elected by anyone in Saint Lucia, other than by the parliamentarians on the government side”

He added: “I will not allow this to happen to me. I can say to the Speaker, if he is going to engage me in debate in the House again, he can rest assured the same thing will happen.”