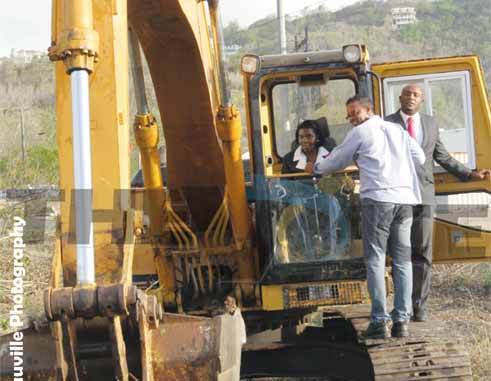 THE ground has finally been broken for the National Aquatic Centre to be completed in time for St. Lucia hosting the 2017 Commonwealth Youth Games.

The $12 million facility will be built towards the eastern end of the Beausejour Cricket Ground inGros Islet. In mid April of this year the Republic of China on Taiwan made a contribution of $1,055,290.54 in grants towards commencement work.

Speaking at Tuesday’s sod turning, Representative for Marrow Inc. (the contractors) RajneshWalia gave an overview of the project promising that it will be one of “the best swimming pools in world”.

He said: “The pool will be constructed pre fabricated and shipped to St. Lucia and will be installed here at this facility. Its length is about 65 metres long with eight lanes and an adjustable bulkhead which can be moved back and forth. Seating capacity is 500 with a VIP section in the middle for dignitaries. The pool is estimated to be completed within one year depending on the weather conditions we will have in St. Lucia. Work will start almost immediately as our equipment is already on site”.

James Chang, Ambassador of the Republic of China on Taiwan said it was great to learn that the National Aquatic Centre will serve to meet the needs of the local association and ensure that swimming develops in the manner that is consistent with the policy of promoting sports and health in St. Lucia.

Minister for Commerce, Business Development and Consumer Affairs and Parliamentary Representative for Gros Islet Emma Hippolyte said the idea to construct a National Aquatic Centre had been around for years.

She said the government of St. Lucia as co-funders of the project was providing the land on which the NAC will be constructed. She said she had been informed that Marrow International had been contracted to construct the pool, and was hoping that all efforts would be made to recruit locals on this project in order to transfer the appropriate technical skills required for the maintenance of the facility.

Hippolyte said the construction of the NAC will turn the Beausejour facility into a complex comprising the BCG, the national tennis centre, the indoor facility and now the national aquatic centre, “a complex that will meet international standards and a complex that involved million of dollars in investment which calls for an efficient and effective management structure to hold even a potentially valuable tourism industry”.

The Minister went on to recognise the Worrell family for their sterling contribution to the sport of swimming in St. Lucia. “Dr. Worrell as a private investor, invested in a pool at Rodney Bay which has contributed significantly to the growth of swimming as a sport in St.Lucia and today I acknowledge this investment”.

Minister for Youth Development and Sports Shawn Edward said it was a great day for sports development in St. Lucia and moresofor swimming, noting that in recent times St. Lucia had made significant strides in a number of sporting areas particularly swimming.

Said Edward: “In 2014 I met with the national swimming team as they left for the Carifta Games and I said to them if they could return to the shores of our country with one silver medal they would be celebrated in a manner they had never seen before. They accepted the challenge, but unfortunately they were not in a position to deliver. In 2015 not only did they deliver, but they did so in a manner we did not imagine possible”.

Prime Minister Dr. Kenny Anthony noted that this was the first ever investment in sports infrastructure by the state in a swimming facility. He said the investment was “a sizeable one”.

He continued: “It has always been my vision what we should develop two national sports centers, one in the north anchored by the Beausejour Cricket Ground and the other in the south anchored by the George Odlum Stadium where both will have a common suit of sporting infrastructure as well as specialized infrastructure. This national aquatic centre also helps realize the dream of Beausejour being a national sports centre.”