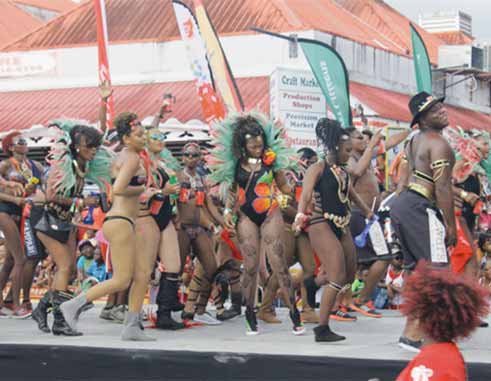 I don’t know why every year, the buzz about the Carnival season surprises me but it just does.

This is the time of year when you see people who cry about hard economical times throughout the year suddenly perk up and fall into wealth.

As a member of the media, this time of year is one of the busiest seasons for us as, like the revellers and party goers, we get to or should I say “have to” go to most of those events but it is then that we see who has money and how some of them get that money.

You know, whilst the ones who stand to gain from this season continue to laugh all the way to the bank, it is amazing to see how patrons continue to sell themselves and many others around them short just for that brief moment of revelry.

What else can you do but shake your head in embarrassment and pity when you see young women literally sell or rent their bodies out to men, some married or in relationships, some in “high positions” some foreign and looking for a good holiday fling and some just plain sick, all just to get enough money to pay for carnival costumes?

It’s as if like moths to flames, these individuals are hopelessly drawn to these situations and their minds (if they have any) simply fly out of the windows.

And the men are just as bad because if they are not looking forward to the season themselves to get laid and patronise these “working women” then they themselves are busy looking for sugar mamas to pay for their good time just as the young women are doing.

It is and will always be a sad situation when you see a woman who lives south of the poverty line with two or three children in a run down shack, chipping down the road in the VIP section of a popular carnival band.

Now, I’m not saying that this is the case with EVERY individual as mentioned above. After all, it could have been a gift, they could have received a legitimate fortune or they could be jumping for free, BUT we all know that this is extremely rare.

And then come April/May of the following year and it’s, hello baby boom.

Another act that I just cannot understand no matter how anyone will try to explain it to me is the borrowing of money to be part of these festivities…people, if you did not have money to begin with before the season started, where will you get the money to make any repayments after the season?

And then the same people end up with lenders chasing them (sometimes literally with guns and cutlasses) to make payments sometimes landing them in court and even prison. Others end up making extreme decisions like stealing, ending their lives or surprise, surprise…selling their bodies to make their repayments.

I mean, companies will do anything to make a buck or a million but morally, shame on them for preying on the individuals (who are seemingly endless here) foolish enough to think that the loan agents offering special carnival packages are thinking about them…it’s disgusting but at the same time I say, kudos to them because they are definitely getting what they set out to achieve…more and more money.

I’ve heard so many people say that they have saved up for this season all year round and let me just say, if all your business is sorted out and your finances are in check then PARTY HARD DUDES but if you are going to say the same thing but you are two or more months behind on your rent, your fridge is empty, your children are so hungry that they can only gasp instead of cry, you use candles at night and bathe out of buckets because your utilities have been cut due to non-payment and Courts is knocking on your door to collect the sofa, fridge and washing machine that you haven’t paid for in four months…what business do you have paying $900+ for a carnival costume and for tickets to shows like Colour me Red, Sexy in Black, Euphoria and all the other shows lined up?

Call me rude (and quite frankly I don’t care) but you need a doctor to examine that hollow thing floating on your neck called a head because you and your priorities are way off, especially if there are children in the mix.

Don’t get me wrong, although Carnival is not my cup of tea, I have nothing against it but what gets to me is the fact that the celebration that started out innocently and with great ethics way back when has now turned into a big game where there are major winners and even bigger losers.

I think people need to take a step back and really evaluate their priorities.

These days, Carnival is an investment…it ain’t cheap, so is the expense for a couple of days really worth it?

I’ll say this again: if you can afford it then by all means, go all out and whilst I’m not insinuating that Carnival is only for the rich, I’m just saying that there is enough suffering and hardship economically to add to it by spending uselessly.

Carnival comes round every year, surely you won’t die if you miss out on a year or two to get your life sorted.