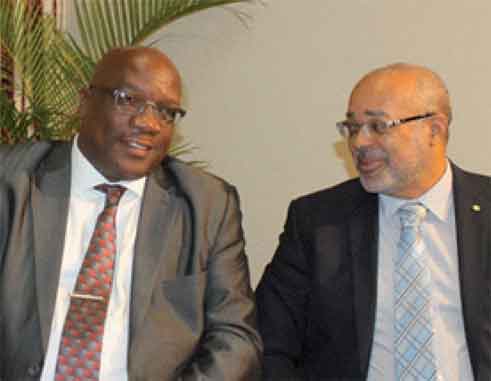 The inaugural meeting was held in Saint Lucia last June with the agenda to apprise Economic Affairs Ministers from the sub-region on the following: the state of play regarding the incorporation of the Revised Treaty of Basseterre into domestic law, the commencement of operations into the regime of free movement of people, the plans for development of the regime for free circulation of goods, and the OECS Growth and Development Strategy.

OECS Director General, Dr.Didacus Jules said the meeting would seek to deepen integration by delving into critical areas, “as well as guiding and directing the work of Member States and the Commission with a view to promoting the attainment of the Economic Union’s objectives.”

“The EAC will address in detail the OECS Growth and Development Strategy, giving consideration to macro-economic targets and related strategies, as well as the status of implementation of the strategy. The role of the private sector as an engine of growth cannot be sufficiently underscored. Several significant private sector initiatives will also be discussed, such as enhanced relations with Cuba and with our newest Associate Member, Martinique, maritime transportation and the OECS Business Council,” Dr. Jules said at the opening ceremony held at Bay Gardens Beach Resort.

Dr. Jules added that the EAC must create the inter-sectoral and trans-disciplinary connections that ensure the development agenda of the OECS is balanced, efficient, cost-effective and doable. Areas such as the impact of health on economic growth and productivity, the reach of the tourism dollar, reducing the food import bill, eradicating hunger and boosting youth employment are areas where more focus needs to be given, Dr. Jules said.

Outgoing EAC Chairman, Dr. Colin McIntyre (Minister for Employment, Trade, Industry and Diaspora Affairs – Dominica), said some of the challenges the EAC faced in the past year “had to do with the importance of people and the masses and politics.” He added that especially since the OECS consisted of small and open economies challenged by global shocks, politicians needed to cater to the needs of the region’s people adequately.

“In (sectors such as) health, agriculture and tourism there are major problems for the region,” Dr.McIntryre said. “We have to continue to build the expertise for health and pool our resources together in various centres of excellence for people in the region. (As for) the chronic non-communicable diseases that continue to be a problem, we have to urge our people to eat what we grow, eat healthy and revert to the lifestyles of the past.”

Oliver Joseph, Incoming EAC Chairman, (Minister for Economic Development, Planning, Trade and Cooperatives – Grenada) said all needed to be done to implement the OECS Economic Union, the engine needed to spur regional economic growth. He added that facilitating and promoting the attainment of the objectives of the Economic Union must remain a priority.

Presently, all Member States are implementing the provisions for the free movement of people and Joseph said “significant work” has been done to advance the OECS Economic Union thus far. The Council, he noted, must be results-oriented.

The other speaker at last week’s meeting was Saint Lucia’s Minister for Infrastructure, Port Services & Transport, Philip J. Pierre, who said the meeting was being held at a “critical juncture in our history of economic planning” and the OECS “continues to stand resolute despite strong social and political headwinds.”

“The realities of globalization have reinforced the fact that our small open economies are not – and shall never be – insulated from global realities. No example is clearer than the challenges and opportunities emanating from the global economic crisis. This seemingly unending period of economic uncertainty has reinforced that the fortunes of our sub-region are linked with the rest of the world,” Pierre said.

The EAC is one of the five organs of the OECS. The other four are the OECS Authority, Council of Ministers, OECS Assembly, and OECS Commission.