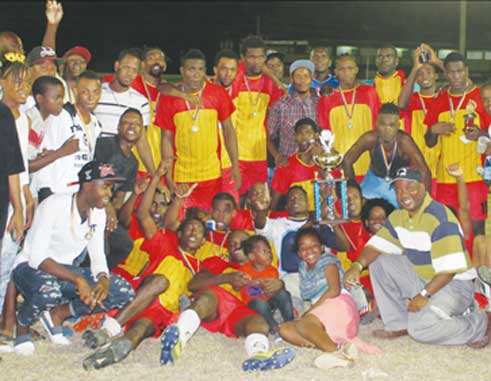 THE atmosphere was electrifying as the Phillip Marcellin Ground came alive with last Saturday for an evening of football entertainment with wins for Platinum in the final of the Vieux Fort South Re-Registration league and Soufriere Bayern Munich in the St. Lucia Football Association Fantasy League respectively.

In an all Vieux Fort final, Platinum won 2-0 over in Mangue U in the Vieux Fort South Re-registration League, with a goal in either half, to lift the championship trophy.

Bobby Emmanuel put Soufriere ahead, giving them a 1-0 halftime lead in the 28th minute of play and that’s how the scoreline remained despite several attempts by Vieux Fort North to equalize.

The resumption brought some urgency from both teams and the loud noise and screams from all quarters of the PMG, but it would be Emmanuel’s strike in the 56th minute that would commence a carnival type celebration for the fans from the western town.

With 2 – 0 down the shouts became louder from the Vieux Fort North camp and the urgency to score was evident. Their persistency in front of the VFN goal was finally rewarded Jeffery Estaphane beat the Soufriere custodian in the 76th minute; but that was how the final score remained until the final whistle.