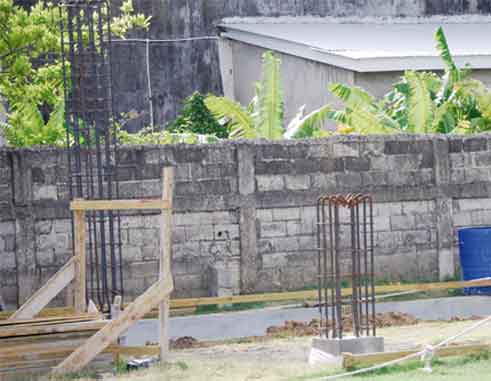 THE old saying “better late than never”, rings true in this instance. The La Ressource playing field in Mabouya Valley has been faced with an uneven surface, improper seating accommodation and poor lighting in the past. Now, it is on the verge of becoming the latest re-commissioned playing facility for St. Lucia’s sportsmen and sportswomen.

Minister for Youth Development and Sports and parliamentary representative for Dennery North, Shawn Edward, recently spoke with THE VOICE about the work presently taking place and what one should expect from the Valley when the project is completed. Said Edward: “The refurbishment of the La Ressource Playing Field is at an advanced stage. As far as the grassing is concerned it is 100 percent complete, that’s according to the expect curator Ken Crafton.”

“The Ministry of Finance has made available to us the money for the fencing for that facility; the other component we are awaiting now is the completion of the Community Pavillion. Recently when we commissioned the lights in Anse la Raye both myself and the Prime Minister and I alluded to the fact the Ministry of Youth Development and Sports in collaboration with the St. Lucia National Lotteries will be embarking on a project where community pavilions will be constructed in Anse la Raye, Canaries and La Ressource on a pilot phase. Once we can get these things going I anticipate the field will be recommissioned sometime in August and the sports- loving people of Mabouya Valley can begin to assemble at La Ressource to enjoy the various sporting and other activities the playing field will be used for”.

He added: “I know it’s a bit early but one of the other things we can consider for the La Ressource area is a 25 metre aquatic facility that would expose the young people of Mabouya Valley and its environs to swimming. It is not just swimming for competition. Swimming is a life skill and the more people you introduce to the basics at an early age, the better. It will augur well for our community and St. Lucia by extension”.

Edward said a number of sporting programmes were being introduced into the community. Tennis coach Ricardo Bowe had been able to set up shop in the Mabouya Valley and now had scores of school children coming out for lessons on a weekly basis.

“Soon we will see the reintroduction of volleyball in the Valley. For the past three years volleyball coach Denis St. Clair came to the valley to coach the sport, but his effort was confined to the Richfond Combined School. We were also able to get the basketball infrastructure back on stream so on evenings we have a lot of young persons coming over to the court to play the game”.

Edward said that the nearby Grande Riviere Playing Field had been earmarked for the FIFA Goal Cup Project. The government had done its bit with respect to setting up the project, and the St Lucia Football Association now had to finalize a few things on their end and once that was completed, there should be some movement in that area.

Asked about the cost of the La Resource Playing Field project, Edward said: “When the project was first conceptualized we had to go through the process of land acquisition. We also had to engage in an exercise known as crop compensation where a lot of the farmers who would have been displaced had to be paid for their crops. So all these associated costs would definitely cause the figures to rise. In terms of the playing field and the lighting infrastructure that has been installed it is just EC$1.3 million, but the construction of the Community Pavillion and the fencing would probably take it up EC$2 million. It is money well spent”.

Edward said his government believed that sport can be a vehicle for human potential to be realized and so wanted to give young persons in all the communities of St. Lucia an avenue through which they can express themselves and enhance their talents. He added: “Who knows, they may make it big on the international stage”.