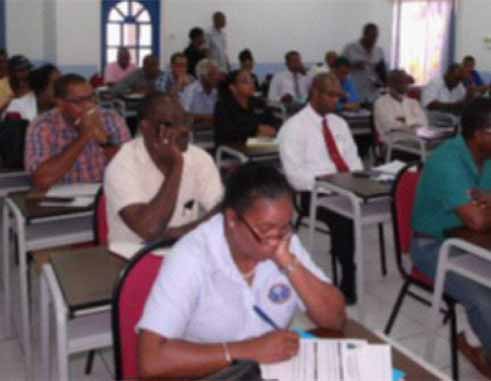 THE Institute of Surveyors (St. Lucia) Inc at the Annual General Meeting held at the Ministry of Infrastructure Conference Room, Union, last month (April 25) took the unanimous decision to re-elect the entire executive to run the affairs of the professional body for the period 2015-2016.

Baptiste, a Licensed Land Surveyor by profession thanked the members present for their support over the last year and announced that at a FIG World Congress held in Malaysia in July last year Saint Lucia’s application for membership was accepted. He said, Saint Lucia was the first association of surveyors in the OECS to receive that affiliation and the third country in the Caribbean.

FIG is an international body and non – governmental organization recognized by the United Nations and World Bank set up to ensure that the disciplines of surveying and all surveying practitioners meet the needs of the community and the market in which they are present. This worldwide professional body measures and maps, estimates and costs, assesses and values, analyses and models, plans and manages the land and the seas, its natural resources and structures thereupon for the effective administration of our natural and built environment.

The Institute of Surveyors is also affiliated with CASLE, the Commonwealth Association of Surveying and Land Economy formed in 1969 as a federation of independent professional societies representing surveying and land economy in Commonwealth countries.

The St. Lucia Institute of Surveyors last month hosted a successful one day seminar entitled: “Positioning Saint Lucia’s Property Markets for the next decade.” This was the second for the year. The first one was a three day seminar held in February titled: “Toward the efficient use of GPS by both the public and private sectors in Saint Lucia.”

The Institute has summoned all Valuers to a meeting tomorrow at the National Wellness Centre Auditorium, Millennium Highway, Castries, to discuss The Eastern Caribbean Currency Union (ECCU) proposal and its desire to promote greater coherence and clarity in the structure and organization of the valuation profession in the member territories that are parties to the Treaty establishing the Organization of Eastern Caribbean States (OECS).

The aim is to provide a framework to regulate the appraisal profession in the OECS member territories with a view to instituting a system of peer review and maintaining high standards of professional practice.

The Institute of Surveyors (St Lucia) Inc. [ISSL] is facilitating the discussion of the issues associated with the proposed development and introduction of the proposed Eastern Caribbean Appraisal Institute.