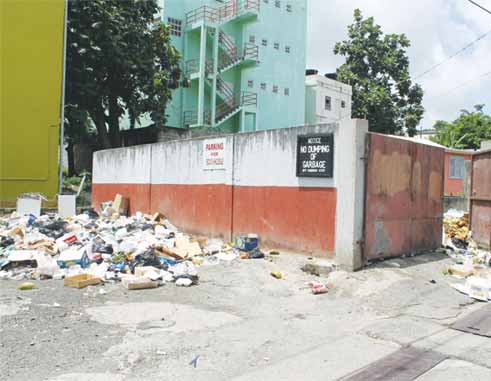 THE unsightly mess after a street party or musical event is a must see for anyone who wants to have a bad conscience for the right reason. It’s just so heartbreaking to see our beautiful surroundings littered with empty cans, plastic bags and other packaging waste. South Africans are fond of saying that “a clean person in a dirty town is a dirty person.” And if as the Bible says, cleanliness is next to godliness, then some areas in the capital city, including the harbour, must be portals to hell.

Looking around the country today, one forms the discombobulating impression that the plastic packet has become the national flower, and in some tourist and sightseeing areas it is starting to become a featured blossom. Alas, they eventually end up in rivers and streams – all the way to our oceans.

The enormous amount of fast-food wrappers and miscellaneous garbage sprinkled carelessly on the shoulder of many highways is a national disgrace. It is not unusual to see a driver roll down his window and jettison garbage missiles onto the street or highway, then contemptuously and fearlessly drive off without any display of penitence or benefit of hindsight. Just where is our pride in this country? When will the revolution in our thinking begin? Our citizens need to look inward and cogitate; and demonstrate more personal responsibility, especially when we’re talking about social responsibility, eco-tourism and sustainable development.

Last week, I witnessed a roadside vendor near a prominent business establishment in the capital city emptying a wash basin full of plastic baggies into a gutter that was already clogged. Who cares, right? It’s not her responsibility. If the roads are flooded after rainfall and all this waste spills out onto the street, guess who Saint Lucians will hold responsible for the mess? My dear people, we have to start looking at environmental pollution and indiscriminate littering as issues of personal responsibility, national pride and civic virtue.

Further compounding the problem is a lack of waste management infrastructure, financial resources and societal will. The negative impact of this pollution is costing Saint Lucia dearly, not just environmentally, but also economically, as negative reports about littered areas and beaches deter travellers and tourists.

Let us begin to alert people to the dangers of the plastic in our daily lives by painting a stark picture of how it chokes our oceans and trashes our beaches. That picture should reveal how plastic particles can enter into the food chain and return to us through our dinner plates. We have to realize that litter in the ocean isn’t just ugly and inexcusable, it impacts everything. It can make the ocean more vulnerable to impact from climate change, coastal development and over-fishing. It impacts local economies, seafood industries and recreation, and reduces our access to beaches. Moreover, without corals many types of fish would not exist, because reefs protect fish as they mature. How do we reasonably promote eco-tourism in this country given the pathetic state of our environmental consciousness?

In any event, the real challenge is to combat an economic model that thrives on wasteful products and packaging, and leaves the associated problem of clean-up costs. Critically, our island needs to introduce a levy system on plastic carry bags, so as to encourage more people to buy durable bags for reuse when doing shopping. Let’s follow the lead of other countries and introduce legislation restricting the sale of plastic bags, in a bid to reduce littering and pollution. I believe the time has come to let customers pay for their own plastic grocery bags at our nation’s supermarkets. On a different note, why haven’t we had any useful debate on the recycling possibilities for plastic bottles? Did you know that the mass of plastic that has been produced until today is enough to wrap the entire earth in plastic wrap six times over?

Recently at a jazz event in the south, it was rather unfortunate to observe that not a single garbage bin had been provided for the disposal of waste, especially given the great number of children who were present. Were we inadvertently giving young people the nod to litter and convey the impression that someone else would clean up later? This is where I believe we have to nurture our people into developing healthy habits that later form their personal and national characters. I strongly believe that the promoters and organizers of major events such as music festivals, football matches, etc., should be required by law to ensure that litter control measures are in place at the venue and in the surrounding vicinity before, during and after the event. Likewise, local authorities are responsible for keeping public places that are under their control, including public roads, clear of litter as far as is practically possible. This should include arranging cleansing programmes, as well as providing and emptying litter bins.

Changing the habits and attitudes of a population is a huge challenge; suffice it to say that this effort will necessitate the employment of a combination of information, education, legislation and hands-on action to empower the local people. The establishment of a new environmental protection agency which allows people to lodge an offence using vehicle details and the time and place of the incident would be a very sensible thing, not to mention severe fines for improperly disposing of larger litter, like furniture and appliances. It’s instructive to note that in order to facilitate better waste management, some countries have gone as far as legally obliging citizens to separate their garbage. The goal is to motivate ownership and a take-charge attitude on a community and individual level.

Some countries including South Africa have considered revolutionizing their approach to environmental management by instituting draconian measures with respect to littering. Amanda Nair of the country’s waste management entity explains, “Our principle approach is underpinned by the notion espoused by Albert Einstein: “A problem cannot be fixed by the same level of consciousness that created it.” If South Africa was a police state, I would ask for traffic officers to ticket and fine litterers. Singapore did it. For years Singapore’s elite force of undercover cleanliness officers nabbed and fined litterers. The covert operation involved plain-clothes officers who caught people, local or visitors, in the act of tossing plastic waste and cigarette butts on the ground. First-time offenders and those caught flinging small items such as sweet wrappers or cigarette butts were fined S$200 while recalcitrant litter throwers of large items such as soft drink cans were charged in court. Those formally charged may be fined up to S$1 000 and forced to spend time cleaning litter on the street. Also, Singapore is known for its heavy fines against anyone who spits, urinates in elevators or doesn’t flush public toilets. The government only recently began allowing the limited sale of chewing gum after outlawing it for a dozen years. Singapore did it. Why can’t we? If we do it, before long, as word got around about the crackdown, things would start to change.”

The ongoing challenge, however, lies in inculcating proper social habits in our children and educating consumers through public education campaigns about their role in recycling plastics and developing new ideas for environmental conservation. I would also bring comprehensive programmes to the schools in which charismatic speakers would teach children about ownership and caretaking in their communities.

We need to raise the awareness of this critical issue and transform environmental care into a learning experience not only for our CHILDREN, but critically also for young and older ADULTS. Every one of us can make a difference by KEEPING SAINT LUCIA CLEAN AND LITTER-FREE.