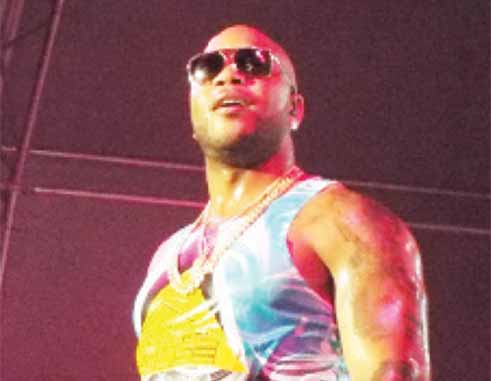 THE headliner for the Saturday night’s highlight of the 25th Annual St. Lucia Jazz and Arts Festival, Flo Rida, stepped onto the main stage and wowed the huge crowd with a more than energetic performance and his noticeable homage to the Saint Lucian Flag.

The Floridian rapper whose real name is Tramar Dillard donned a tank top with art work that was a cross between the St. Lucia Flag and the label of his latest album “My House”. This, according to fans, was a welcomed and creative gesture.

When asked about his choice in clothing by the local media following his performance, he said: “Anywhere I travel around the world, I try to show the fans that in every country and island I go to, that I really appreciate them. I don’t take anything in life for granted, especially my heart’s desire. Being able to come out here, people support me. I definitely want to give my all and my artistes as well as myself, that’s what we thrive on, just showing love because God could have blessed anyone to come out here and live their dreams but since I was chosen, I want to fulfill that”.

Flo Rida definitely did not shy away from the massive crowd as he spent at least one quarter of his performance on the grounds mixing in with his screaming fans which was an extremely rare occurrence.

Sitting on the shoulders of one of his handlers, the artiste went deep into the heart of the crowd. He also literally showered his fans with champagne, roses, clothing off of his back and rags used to wipe his sweat.

Flo Rida said he felt right at home in St. Lucia and on the stage and was humbled by all the love and support he received from the crowd for his first ever performance and visit to the island.

“I feel like I was born here in St. Lucia. The love that I got. I anticipated coming here just being on social network, me and my artistes here, we definitely anticipated it and the love we got, I look forward to coming back really soon”.

The rapper who owns the independent record label “International Music Group” said by all means, he would be open to collaborating with artistes from the Caribbean including St. Lucia. However, as a perfectionist, he was looking for individuals who were serious and dedicated to the craft.

“I want people who are self motivated, and will take their gift and bless someone else with it. So I’m really big on that”.

Flo Rida said it’s a plus to reach out and work with people from different cultures.