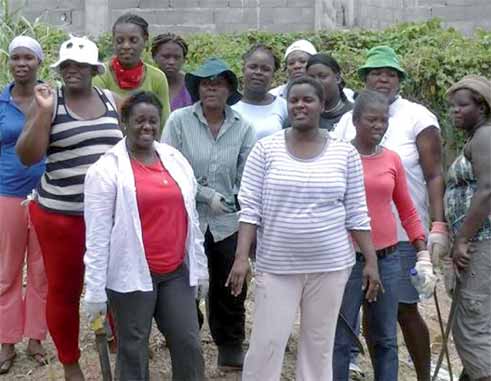 A GROUP of parents from Bellevue, Vieux Fort, who launched a kitchen garden group, have undertaken a project after securing funding from the United Nations Global Environment Facility (GEF).

The funding is being administered in three areas: a composting project, a seedling project and land acquisition for the group.

The Bellevue Kitchen Garden Group was initially formed in 2010, and modeled after the backyard gardening initiative of the Ministry of Social Transformation’s Community After School Programme (CASP). The parents of students who attended the CASP expressed interest in the backyard gardening project that their children had become involved in through the after school programme.

“The Kitchen Garden Group has one basic objective, and that is to promote healthy eating, and so the group embarked upon a number of lectures and discussions with various resource people to learn more about healthy lifestyles and food security,” Social Transformation Officer for Vieux-Fort, Mr. Faustinus Faisal said.

Since then, the group encountered several challenges including securing access to funding and having to deal with the effects of natural disasters. It remained persistent with the support of the Ministry of Social Transformation, and to date, has successfully engaged the United Nations Global Environment Facility (GEF).

“This venture has changed my life,” said Jamlin Clovis, Public Relations Officer for the kitchen garden group. “I have been growing vegetables, but tomatoes and I were enemies—that is until I tried the ones we grew using compost. What a great difference in the taste. I am grateful to the Ministry of Social Transformation for helping to transform something I love into a career.”

The Bellevue Kitchen Garden Group has also been successful in securing a marketing partnership with the Black Bay Farmer’s Cooperative through the support of the Laborie Credit Union.