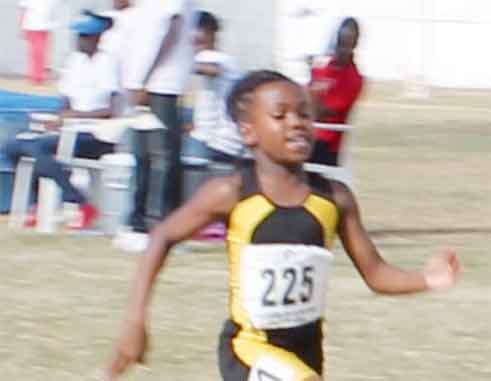 “BELIEVE you are going to make it,” are the words Niomi London lives by on a daily basis. London, a student of the Belle Vue Combined School, is only eight years old and understands the value of goal setting, hard work and the power of a positive attitude.

It is not very often that you find someone at such a tender age thinking so positively.

With one look in the eye, she is destined to make it big on the track. The young and aspiring athlete for the third time this year caught my attention, but this time around at the 1st National Bank Limited 14 and Under Games organized by the St. Lucia Athletic Association held at the Mindoo Phillip Park this past Sunday.

I could not resist interviewing this little princess after she crossed the finish line, but first I had to seek her parents permission, mother Deral London and father Angus James, to do so, and they were so elated about it.

VOICE: what is your favourite subject in class? She quickly replied Mathematics. When asked why Mathematics she said: “Because it’s the best subject”. Not very often do you hear someone at such a tender age select mathematics or even speak highly about that particular subject.

VOICE: How long have you been participating in track and field? She paused for a brief moment and said, “I can’t remember how long I’ve been running, but I am really enjoying it at the moment”.

She was excited about the whole idea of being interviewed and quickly said, “My favourite event is the 50m dash”.

Interestingly, Niomi set a two new records Sunday. In the 50m she finished in a time of 7.97 seconds and the 150m in a time of 23.31 seconds. She was certainly a class act finishing well over 15 metres ahead of the second place finisher in the latter event.

Like most aspiring athletes, she would like to represent St. Lucia at the Carifta Games, the World Championship and then the Summer Olympics at some point.

The VOICE also spoke to her coach Claude Charlemagne from the Pace Setters Club and this is what he had to say about Niomi, “She seems to be an athlete with immense potential and natural ability. It’s about seven to eight weeks since she joined the Pace Setters Club and I was just trying to observe her weaknesses and trying to build on what she has already, but she is definitely a natural and if she continues her training along that path, she is going to be a force to be reckoned with not just in St. Lucia, but also when she goes out in the region.

VOICE: What events does she normally do? Claude replied: “She’s normally in the sprints, the 50m and the 150m, but she seems to have the potential to go even beyond that in terms of her training. She hasn’t reached her full potential. She has a lot more to offer. It’s just that she just started training and I believe with time she is going to mature into a tremendous athlete”.

From my vantage point, the athletics well is overflowing with tremendous talent and potential and with Niomi London on the horizon one thing is certain, if you put your faith on the line and believe in yourself, look to the support from others especially your parents, and give it your all, success is guaranteed. Go for it Niomi!!!