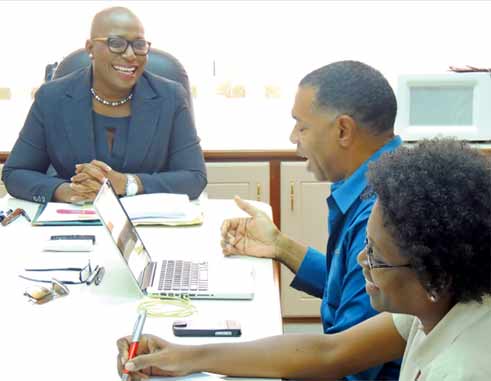 THE National Vision Commission paid a courtesy call on the Leader of the Opposition Dr. Gale Rigobert at her office on Thursday, to brief her on the work of the Commission thus far.

The National Vision Commission comprises individuals appointed by Government, the Opposition and Civil Society. Commissioners bring a broad range of experience and expertise from a diverse range of vocations and professions including Education, Medicine, Economics, Engineering, Religion, Law, Accounting, Public Administration, the Performing Arts, The Environment, Youth and Community Development. The Commission has two years to complete its work.

Chairman Augier, briefed Dr.Rigobert on the progress made since the launch of the Commission in Parliament in April of last year. Augier said the courtesy call is part of the Commission’s thrust to conduct its affairs in an unbiased, open and transparent manner.

The Commission has been meeting once a month since August of 2014 to review its mandate and put the necessary systems and structures in place to commence its work which includes, the mounting of a national dialogue, the articulation of a national vision statement emerging from the dialogue, and the formulation of a strategic plan (national strategy) to achieve the vision.

The national dialogue began on March 22 when the Commission engaged the media in an open, frank and spirited discussion on national issues. Youth is the next group the Commission will engage. The third dialogue is likely to be with political parties. Augier told the Leader of the Opposition: “We intend to deploy across Saint Lucia and engage our people in finding out what they want for themselves and their country.”

Dr.Rigobert commended the Commission for engaging the media first. She noted that “the media is a very powerful force in our country and they are critical to all that we do.”

The Leader of the Opposition suggested that the Commission meets with the political parties in one forum. She said: “We’ve got to find a way to bring our political parties together in one room to discuss the development of this country, outside of a partisan framework.”

Dr.Rigobert reiterated her view expressed at the official launch of the Commission, that the country is being held hostage by the 5-year political cycle, and there needs to be more long-term planning of our development as a nation. She urged the Commission to take some time to review previous national initiatives which may inform and guide its work. Chairman Augier assured her that the Commission is engaged in such an exercise.

The Leader of the Opposition shared her concerns on current and lingering national issues impacting the country. In light of the recent spate of fatal shootings, she felt strongly that “we need to begin to think more critically about the correlation between security (crime) and development.

Dr.Rigobert said there was a need to pay closer attention to how St. Lucia manages its natural resources and the environment, especially in light of the impacts of climate change. Her conviction is that environmental issues must be factored-in to our development equation. She cited creative industries, information and communications technology, and health services (health education/offshore medical schools and health tourism) as potential pillars of national development.

Healthcare – especially the prevalence of non-communicable diseases such as diabetes, hypertension and kidney failure, and their debilitating effects on our population, especially our workforce – was a major concern for the Leader of the Opposition. Education, culture and the Arts are among the other issues on radar. In the political arena, she lamented the lack of succession planning, noting that “our leaders don’t groom successors” but for the sake of stability and growth as a nation, “there needs to be leadership sustainability.”
The tone and tenor of the discussions between the Commission and the Leader of the Opposition was very cordial, introspective and nationalistic. The Chairman was effusive in this thanks and appreciation to Dr.Rigobert, for taking time off to meet with the Commission, to be briefed on its work thus far, and for sharing her thoughts and insights with the Commission.