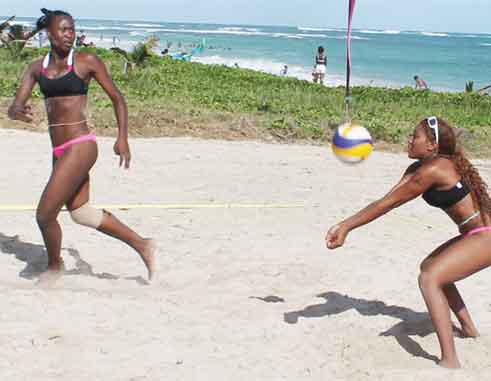 Pairs To Play In Cayman, Antigua.

THE St. Lucia Volleyball Association has named three teams in both male and female divisions to represent St. Lucia over the coming two weeks.

Tevin St. Jean and Afernee Ferdinand along with Dania Hamilton and Kerin Neptune are representing St. Lucia at the opening stage of the 2015 NORCECA tour held in Cayman Islands from April 23-27.

St. Jean and Ferdinand were the upset winners at the recently held Aqua Mele Beach Volleyball Championship on April 5 and 6, only recently agreeing to play together. St. Jean has some experience having partnered with Cohen Caesar on one stage of the tour before. This will be Ferdinand’s first outing.

Meanwhile, Augustin Faulkner and Cohen Caesar will lead St. Lucia’s charge at the 2016 Rio Olympic Beach Volleyball qualification, at the Continental Cup in the Male division. This is also now on in Antigua and Barbuda. They will be joined by Sheldon Descartes and Darnel Eudoxie as team St. Lucia takes on nine other ECVA countries for one of four spots in the second round of the Continental Cup scheduled for later this year.

These two teams also performed well in the two local tournaments earlier this year, with Faulkner and Caesar winning the Independence Beach Championships in Vieux Fort Independence weekend and then placing third at the Aqua Mele Beach Tournament Easter weekend. Eudoxie and Descartes were runners-up in both these tournaments and are seen as a tough and steady team.

The Continental Cup pits two teams from each country in a contest, country against country, Team A against Team B and if each country wins a match, then the score is settled with a final death, Golden Set. St. Lucia advanced last time around to the second round and the aim is to go all the way to final round and qualify.

The Ladies Continental Cup is scheduled for April 30- May 1 in Antigua and Barbuda as well, and the following teams have been announced: Dala Noel and Kerin Neptune will partner, leading St. Lucia’s campaign, with Lisa Casimie and JamilaLansiquot pairing up in the second team. Both teams have only this year started playing together and most of the players are fairly young, with Noel, Casimie and Neptune all teenagers, while Lansiquot is only 27. Noel and Neptune won the 2015 Independence Beach Championships, with Casimie and Lansiquot placing second. However in the Aqua Mele Beach Tournament, both teams were outdone by Junior National Player of the Year, Sky Mondesir and veteran Samantha Mann.