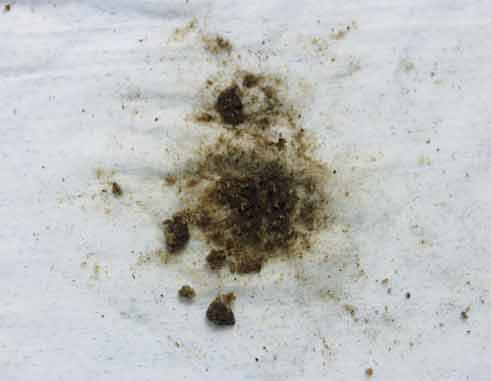 SUGAR consumers were left unimpressed and angry over a batch of un-enticing brown sugar being sold at some of the island’s leading supermarkets last week.
Upon first glance, the sugar appeared to be extraordinarily dark and grainy, with some comparing it to the grit-like substance used to thaw ice on pavements and roads after snowfall.

Upon purchase of the product, an at-home test ended with results that were expected with a mixture of the sugar and water resembling a bowl of black coffee and once strained, a heap of sugar cane and foreign black sediment was left behind.

A number of unsatisfied customers opted to buy the white sugar available and even the Demerara (brown) sugar from Guyana as they said the normal commodity was a turn off.
Speaking exclusively to The VOICE on the matter was the Vice President of the National Consumers Association, MathiausPolius.

Polius said he too noticed the colour and texture of the brown sugar and was instantly turned off buying it. So like many others, he opted for the imported Demerara version which he called the best alternative as opposed to using the white sugar.

Polius expressed concern about the situation stating that sugar was one product that must always meet certain standards.

Polius said: “These supplies are contracted out. They are advertised in the local newspapers and people go into contracts with the government to provide sugar to the country at a certain standard and I would think that cleanliness and all other such items as the absence of extraneous matter, all these things would be taken care of. I’m concerned to hear that this sugar had all these sorts of extraneous matters, the colour was not appealing and it just didn’t look healthy”.

The VP said it is the hope of the NCA that the government would carry out a thorough investigation into the matter and a follow up statement made once they had answers. He added that the people who purchased the sugar should be allowed to return it and have it replaced with better quality sugar so that they could get their money’s worth.
People, he said, would have gotten the raw end of the deal after purchasing the sugar because he was certain that they would not be satisfied for what they had paid for.
Polius said: “Selling people that kind of sugar, ultimately, they are being shortchanged so I’m hoping that the authorities also takes steps to actually have people not use this sugar and remove it from the shelves if needs be”.

He said whilst he could not speak for consumers as to why they continued to accept the substandard goods and services being provided to them on a daily basis, it came down to a matter of choice.

Polius said on the other hand, there was a monopoly on the importation of sugar which had left consumers with little choice in this matter. “It is the government that actually imports that sugar. I say consumers have virtually no choice because although there’s the Demerara Sugar (imported from Guyana) it is a bit more expensive so I go back to my theme, consumers should get what they pay for. Consumers should not be getting substandard products. They are paying for a product that is expected to be given to them at a certain standard and that is the way it should be”.

The VOICE also spoke to a representative from the Ministry of Commerce who said that the colour of the sugar came in a number of varieties ranging from very dark to very light.
Brown sugar gets its colour from the amount of molasses used hence the brown shades.
With regard to the amount of foreign and sugar cane sediments found in the product, the representative said the matter will be investigated and the findings of the investigation will be relayed to the respectful parties involved.

The public also reacted to the dirty sugar: “It’s amazing the value we get for our money” – S. Marcel.

“I myself jumped to see that on the shelf. Who in the world would drink that rubbish? They give it to St. Lucians because they don’t talk on what matters. They will talk about it and say what type of sugar is that and still buy it and they will strain it. I’ll use honey which is very good and dump that sugar” – V. Henry