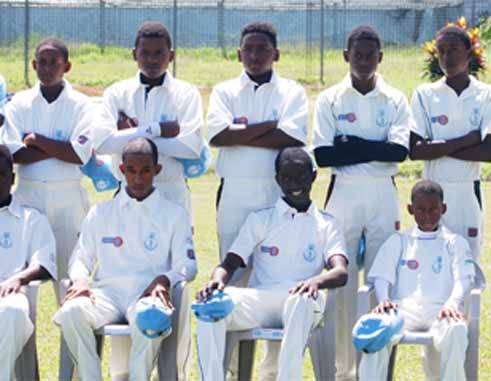 DEFENDING champions St.Lucia retained the Windward Islands Under – 15 Winlott cricket championship on Wednesday in a rain affected match against Dominica at the Mindoo Phillip Park. The game ended in a “no decision.”

Reduced to 32 overs per side, the encounter got off to a late start following a series of rain interruptions. St.Lucia openers KimaniMelius and ChazCepal continued their good run on form in the round robin tournament and posted a partnership of 74, before Cepal was run out for 24 from 33 balls and captain KimaniMelius soon followed just six runs shy of another 50. He made 44 from 63 balls.

With one eye on the temporary scoreboard at the road end and the other on the weather, they lost losing nine wickets in the process for 33 runs. St.Lucia eventually scored 107 for 9 in their allotted overs.

Bowling for Dominica, the duo of Jahsceon Alexander and Micah Joseph took five wickets between them for 43 runs.

In their runs chase the Dominicans were quickly in trouble losing the wickets of Micah Joseph, Sarwan Lockhart and Captain TahjTavarnier with the score on 38 in 9.2 overs when the two umpires called off the match.

Both St.Lucia and Dominica finished with the same number of points (9) from four wins, one defeat and one no decision, but on a head to head rule St. Lucia by virtue of their victory over Dominica in the first round of the competition by 66 runs emerged as champions.